Why do women become their husbands' murderers?

An Israeli court has recently sentenced Lilian Mendoza, a female resident of Eilat, to ten years in prison. The woman pleaded guilty to killing her husband, who had been torturing her for 20 years. 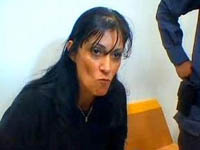 The 41-year-old woman shot her husband dead. The man would beat her every day. Numerous witnesses confirmed during the trial that it would be impossible for a normal person to live with a man like that.

Such stories, when desperate wives kill their husbands being longer able to tolerate their humiliations, are not rare. In Russia's Novokuznetsk, for example, a 20-year-old woman killed her husband in the fall of last year. The young people met each other in a nightclub. The woman, Irina Golikova, was working there as a strip dancer.

The young man, a student, started working at the same club as a fire show artist. The couple got married and had a baby. However, the spouses would fight very often, and the man would beat his wife during the fights. After one of such conflicts, the young wife grabbed a knife and stabbed her husband to death.

A similar incident took place in the city of Omsk. A woman killed her husband in a family fight after 30 years of marriage. The man's body was found near a local cemetery. When the man came home during the last night of his life, his wife was cleaning the apartment. The man was very drunk - he could hardly stand on his feet. He started drinking almost every day after he had lost his job. The man started yelling at his wife, calling her names. Afterwards, he started threatening her. He said that he would kill her, so he started looking for a kitchen knife around. The woman grabbed a rolling pin and hit the man on the head. The man collapsed and lost consciousness. When the woman's daughter and son-in-law came home, she asked them to help her take the body out. They tied him and put him in the car.

The suspect is certain that her husband was still alive when they dumped him not very far from the local cemetery. The man never recovered, though. His body was found two days later.

The woman pleaded guilty to the murder, although she said that she was not sorry for what she did. The woman's daughter does not blame her mother. According to her, they had enough.

Meanwhile, a British court started hearing an unusual case about a serious car accident. The defendant, Caroline Meeking, 45, caused the death of her husband in a crash by pulling on the handbreak. The car was traveling at a speed close to 60 mph when it happened. As a result, the car was sent spinning before it collided with another vehicle traveling in the opposite direction. The woman's husband died at the scene.

"I thought if I put the handbrake on it would slow the car down and I could get out. He could then go off and do whatever he wanted to do," the BBC quoted Meeking as saying.

Why do women become their husbands' murderers? Pravda.Ru asked expert opinion from Igor Yanushev, a Candidate of Medical Sciences.

"Women's psyche is much less stable than that of men. As a rule, women are psychologically weaker than men. Women are mostly more emotional. They spend much more energy on problems than men do. There are exceptions from the rule, of course. In addition, women's psyche is prone to periodical changes that take place in women's life. It goes about pregnancy and childbirth, climax and other things. In other words - it goes about the things that men never get to experience in their lives. This is the reason why women's psychological health can be damaged much more seriously in comparison with men.

"Any man must realize that any violence committed against women, either moral or physical violence, can lead to unexpected consequences. Women are much more persistent than men when it comes to revenge. Women are much more explosive than men, they are more unpredictable.

"When a woman tries to defend herself, she can do anything, including murder. From my experience I can say that women commit grave crimes more often than men do."