For many years, Russian tourists have been the biggest nightmare for Europe. Many Europeans would prefer not to deal with "always drunk and rude Russians." However, it seems that the situation has changed for the better now. Either Russians became more civilized, or the West no longer follows the stereotype about typical tourists from Russia. 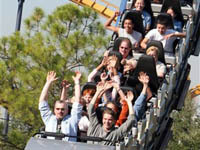 The number of Russians, who prefer to spend their holidays abroad, grows every year. We are not talking about such most popular and moth-eaten destinations as Turkey and Egypt. Many Russians prefer to visit European and exotic countries nowadays.

Nevertheless, Russians were known as fast and furious tourists several years ago. This even led to the appearance of "No Russians" service in some countries.

It appears that the attitude to Russian tourists has started to change now. Russian tourists bring profit, so foreign resorts try to do their best to attract tourists from Russia. Many restaurants offer menus in Russian, waiters and hotel managers learn Russian words and phrases to be able to communicate with Russian visitors. This is not much, of course, but it means that foreigners have finally come to realize that Russian travelers like to spend their money. Therefore, one needs to make them come over and over again.

It is not easy for a Russian citizen to get a British visa. However, the British authorities intend to issue entry documents for the period of 2, 5 and 10 years. It is possible to get such visas already, although not many people are aware of that.

Andy McFarlin, the head of the UK Border Agency in Russia, said at a recent news conference that the number of issued visas had had a 33-percent increase over nine months of 2011 - up to 142,000. The visas were given to 92 percent of applicants, which exceeded the average level on all other countries (86 percent).

It turns out that the Russians, in comparison with tourists from other countries, visit art shows, museums and cultural events more often than tourists from other states. In addition, Russian tourists like to spend their money in local restaurants and stores. An average Russian usually spends 1,136 pounds sterling vs. the international average level of 563 pounds.

The immense interest of many Russians in Finland has made Finnish police officers study the Russian language. As many as 209,000 Russian tourists visited the country in 2010. In 2011, the growth of the tourist flow exceeded 20 percent. The number of visas issues by the General Consulate Office of Finland in 2011 made up more than one million.

As a result, Finnish border and customs officers were forced to start learning the Russian language. This year, the subject will become mandatory for rescue services of the country.

Sweden also understood the advantages of being attractive to tourists from Russia. The country has unveiled new rules for Schengen visas for Russian tourists. From now on, applicants will not have to fill "Family Information" section.

"Sweden introduced that extra document about a year ago. Applicants were supposed to fill out the information about their close relatives. There is nothing complicated about that, of course, but the less red tape the better," Anna Tereshchenko, the chairwoman for the visa department of Viking Travel said.

Moreover, Sweden plans to issue long-term and multi-entry visas for six and twelve months to Russian tourists. However, this privilege will only touch upon those tourists who already visited the country many times before.

The European Union is also ready for compromises. The EU is expected to sign an agreement to ease the visa regime with the Russian Federation in the first half of 2012. This could be a highly positive move for many people, since it goes about short-term visits to European countries.