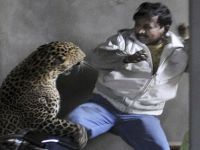 It happened last Saturday - terror in the Indian city of Guwahati, where a leopard in fury had been forced from its natural habitat by development programmes and ran through the city attacking people. The animal left one dead and four people wounded before being tranquilized and sent to a park. Discretion advised with the photos.

In rural areas of India, development programmes are pushing the leopard into urbanised areas in search of food. On Saturday, tragedy struck. In the Indian city of Guwahati, Assam, a terrified leopard ran through the streets attacking people. The fatality was a lawyer of fifty years of age, Deb Kumar Das, who was attacked as he spoke on a public telephone. He was taken to hospital on the day of the attack and died the following day at home, perhaps of a heart attack.

The leopard had first been seen early on Saturday morning near a crematorium, but then strayed into the heavily populated Shilpukhiri area of the city, where it was chased by locals wielding iron rods and sticks, but the animal, terrified, attacked the residents after at first looking for refuge on the top of some buildings. Upon entering a shop, it was locked in by residents.

Among the four other people attacked was the man in the photos, Kripesh Dey, who was scalped. The man is now OK but he had the fright of his life and was jolly cheesed off. The local authorities have confirmed that the leopard will be taken to the Manas wildlife sanctuary 200 kilometres from the city, where it will be released to live in the wild. 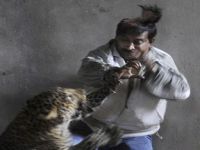