Who needs wizards and healers? 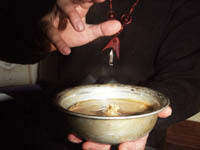 Why various healers, magicians, wizards and other such individuals have multiplied in recent years? Why do people rarely listen to the advice and recommendations of seasoned elders and experienced physicians, and increasingly trust another category of people with their health? In Lipetsk, a young mother entrusted her sick child to a magician. During the "procedure" the baby suddenly died.

The "White magician," as he described himself in an advertisement in a local newspaper, was unable to provide even the simplest medical care to the two-year old. This is understandable, as he is an engineer-technologist by education.

He claims to be capable of removing damage caused by jinxing, yet has no medical knowledge or even the most basic skills of first-aid. There was no criminal case in this particular instance. The autopsy revealed that the boy had a rare heart condition that caused his death. The "magician" thought that the boy was jinxed and advised the mother not to run to doctors but pay him a considerable sum for a "cleaning" procedure.

In St. Petersburg not that long ago parents of a boy suffering from severe diabetes refused services of conventional medicine and tried to cure the child with the help of a healer. As a result, the boy died, and the unhappy parents were sitting over the boy's dead body with the "magician" for 30 days waiting for him to wake up from a "coma".

In Kerch, Ukraine, an old woman calling herself a "good witch" in ads tried to treat a woman's hernia with pigeon droppings. In the end, the woman was taken to an intensive care unit with a hernia incarceration and barely survived. How do you protect yourself from these "experts"?

"Unfortunately, there are plenty of sorcerers in Russia. According to my colleagues, only in St. Petersburg there are about 300 various schools of healing, alternative medicine courses, and so on. Naturally, there are a lot more sorcerers, healers and such.

Perhaps there could be fewer of them if Russia had a clear, understandable, and developed legislative framework of alternative medical practice. Alas, we do not have them. The debate about non-traditional medicine, healing and methods of their control have been ongoing for a long time. There is no federal law on healing, although the State Duma deputies attempted to create it.

If I am not mistaken, the main legal documents regulating the activities of healers now are the "Basic Law on Health Care", as well as the Ministry of Health Order "Recommended criteria for admission to the licensing of medical practice." However, neither of them provides a clear and understandable definition of non-traditional medicine and how it differs from traditional medicine.

From the aforementioned documents, it follows that the status of an officially recognized alternative medicine practice is granted immediately after the date of registration in the prescribed manner. A person who wants to be a healer must get a blessing of any registered public organization of healers, and then go to local health authorities and receive a corresponding diploma of a healer.

Then the law requires them to obtain a license for the right to engage in private medical practice. Of course, these people receive diplomas and begin to actively promote themselves, but do not hurry to get a license from the government. This is because the official bodies will require at least a diploma of medical education.

The healers are violently opposed to the control by the state and are against the licensing procedure. They say that their work is so unique and unconventional, that ordinary people (doctors, psychologists) and conventional methods simply cannot evaluate the phenomenon of healing.

This means that they can only be evaluated by their colleagues. This is not only wrong but dangerous. According to officials and representatives of the traditional medicine, the percentage of mental disorders among the adherents of nontraditional methods of treatment is much higher than among ordinary people. So first think whether it is worth going to a magician or sorcerer to improve your health as it is not ruled out that it you will lose it there .... "