As it turns out, not every Russian enterprise that makes military hardware, is protected properly. It is not hard to enter the territory of such enterprises sometimes - one only needs to be observant for it. Sometimes, it is possible to penetrate into a secure facility through a hole in the fence.  This is what Russian blogger Lana Sator did. Under the cover of darkness, the young woman and her friends visited the territory of NPO Energomash in the Moscow region five times. 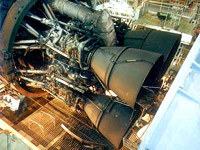 Energomash is an enterprise that produces liquid fuel missile engines for civil and defense missiles, including R-36M, known for its NATO reporting name as SS-18 Satan.

The uninvited guests of the secure facility took multiple photos during their night visits to the enterprise. Lana Sator described her journey on her LiveJournal page and illustrated the story with 96 photographs.

Russia's Federal Security Bureau has already evinced interest in the incident, the Izvestia newspaper rote. Officials representing the administration of Energomash stated that the enterprise had no funds to repair the enclosure.

According to Lana Sator, the enterprise began to repair its enclosure in autumn. It was then said that someone damaged the enclosure of the enterprise during construction works. A couple of months later, the curious friends discovered that the enclosure had not been repaired. The young people did not notice any warnings on the site, so they decided to visit the territory of NPO Energomash at night. They quietly attended two stands and climbed on top of the chimneys.

The blogger wrote that she was impressed with the territory of the enterprise. The most important thing is that the woman and her friends found not even a soul at the enterprise during all of the five night-time visits there. As soon as the young people found no security on the territory of the enterprise, they began to explore various constructions, climbing higher and higher on fire escapes. The friends thus explored multiple rooms with gas analyzing equipment and sensors; they also enjoyed the views of the night city from the roof of the building.

In addition, the explorers entered the central control room, from where operators control the process of engine tests. The young people also visited the hall of the test stand. They were surprised to find out that the windows of the room were covered with poorly mounted iron sheets.

Cameras and infrared sensors were everywhere, but they did not confuse the bloggers. There was no alarm system at the enterprise. It appears that the visitors did not mind to be identified either.

Officials with Roskosmos refused to comment the situation. A high-ranking official said on conditions of anonymity that the Russian space agency was deeply impressed with what happened. "It was similar to the landing of Mathias Rust on Red Square on May 28, 1987. It demonstrated our inability to defend anything," the official said.

The Federal Security Bureau has begun to investigate the incident at NPO Energomash. A criminal case against the administration of the enterprise is not likely because there is no affected party in the incident, the Izvesita wrote.