McDonald's goes belly up in Bolivia 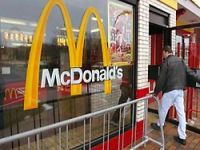 After 14 years of presence in the country, and despite all the existing campaigns and having a network, the chain was forced to close the eight restaurants that remained open in the three main cities: La Paz, Cochabamba and Santa Cruz de la Sierra.

It is a question of the first Latin-American country that will remain without any McDonald's, and the first country in the world where the company has to close because it persists in having their numbers in the red for over a decade.

The impact for the creative and marketing managers has been so strong that a documentary was filmed under the title "Why McDonald's went broke in Bolivia," where they try to somehow explain the reasons that led Bolivians to still prefer pies to hamburgers.

The documentary includes interviews with cooks, sociologists, nutritionists, educators, historians and more, where there is a general agreement: the rejection is neither to the hamburgers nor to their taste. The rejection is in the minds and mentality of Bolivians. Everything indicates that "fast food" is literally the opposite of a Bolivian's conception of how to prepare a meal.

In Bolivia, the food to be good requires, in addition to taste, care, and hygiene, a lot of preparation time. This is how a consumer values the quality of what goes into the stomach, also by the amount of time it took to make ​​the meal. Fast food is not for these people, the Americans concluded.