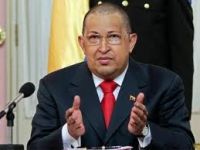 Chávez: Obama is an irresponsible phony who shames the USA

On Monday (19th), Venezuela's President, Hugo Chavez, heavily criticized the U.S. president, Barack Obama, in response to his warning of the alleged restrictions on the rights of Venezuelans.

Chavez called Obama "irresponsible and fake": "Obama will get involved with his things. He dedicates himself to his country, where he has practiced a disaster. Now he comes seeking votes by attacking Venezuela. Do not be so irresponsible, boy," said Chavez in a Council of Ministers broadcast on state television.

In an interview with the Venezuelan daily El Universal on Monday (19th), Obama said the United States increasingly believes that the close ties between Venezuela, Iran and Cuba do not benefit the Venezuelan people.

In May, the U.S. imposed sanctions on the Venezuelan oil company PDVSA for disrespecting U.S. legislation by selling $50 million in oil derivates to Iran. "Venezuela is a sovereign country, proud ... The U.S. has no intention to intervene in the external relations of Venezuela," Obama said in a brief interview with the newspaper. "However, I think the government's ties with Iran and Cuba are not beneficial to the interests of Venezuela and its people."

Chávez, however, was angered by statements of the President of the United States. "In fact, Obama does he know what provokes me? Suffer, I pity you. Let us be calm and quiet, we are free and we will never be a colony of his," he answered.

In an interview with Telesur, Chávez said that Obama is a "shame" and "the biggest disappointment" for the poor and communities of African descent in the United States, who believed in him when he took office: "You are a shame to all these people, so leave us in peace and quiet. Search for your votes there, delivering on what you promised to your people ....," he said.

Relations between Venezuela and the U.S. have been frozen since August last year, when Caracas decided to withdraw its consent to the name of Larry Palmer as U.S. ambassador. Washington answered with the withdrawal of the visa of the Venezuelan Ambassador in the country, Bernardo Alvarez.

Source: With information from Opera Mundi and G1