Ukrainian man to be lashed for touching Singaporean air hostess 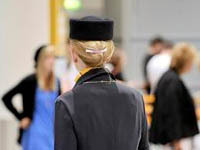 The 35-year-old national of Ukraine is currently on sex crime trial in Singapore. The Ukrainian guest worker in Singapore may face a prison term for committing an act of sexual harassment against a Singaporean woman. In addition, the man can be sentenced to lashes.

The Strait Times, a Singaporean newspaper, published the photo of the accused.

The incident took place on board Moscow-Singapore flight. During the flight, the Ukrainian passenger supposedly touched the buttocks of the 34-year-old air hostess twice. The man also touched the woman's bosom - once.

"The crime was committed on November 15 between 4:15 and 4:18 local time, when a Singapore Airlines jetliner was flying above the territory of Thailand," Interfax reports.

"The perpetrator was arrested as soon as he arrived at the airport. A criminal case was filed against the man for insulting the dignity of the Singaporean woman," the press secretary of Ukraine's Foreign Ministry, Alexander Dikusarov said.

The man, Sergei Serkov, was released on bail. Ukraine's Embassy in Singapore provided an interpreter and a lawyer to the man.

According to the above-mentioned newspaper, Serkov works as a sales manager in Singapore. If the court finds the man guilty, he may face the prison term up to two years. It is also possible that the Ukrainian man will have to pay a fine and receive the punishment by lashing.

The lashing procedure in Singapore is a strictly regulated one. A perpetrator is strapped to a bench and has their buttocks bared. The thickness of the twigs and the number of lashes depends on the perpetrator's guilt. After the punishment, they treat the wounds with antiseptic. They can repeat the procedure in several days.

Bodily punishments in Singapore are still popular nowadays. In 1993, for example, a local court sentenced a US teenager to 6 hits with a stick and four months in prison for breaking road signs and spray-painting cars in the city. Then-President Bill Clinton tried to defend the teenager, but the man was punished anyway.

Russian tourists may commit thoughtless actions abroad too. In 2008 and 2009, Russian tourists bit Israeli stewardesses in the buttocks. Strangely enough, the two incidents occurred on board Moscow-Eilat planes. The two victims of the biting attacks worked for Israir, RBC reports.

On November 16, 2008, two Russian male tourists committed an act of debauchery and attempted to rape a woman during the flight. One of the tourists beat his wife, whereas the other one bit an Israeli stewardess by the buttocks. The pilots had to come out in the cabin to calm the men down.

The two tourists- Dmitry Tsindadze and Dmitry Kazakov - were arrested at the airport of Eilat. The men had to spend eight days in an Israeli prison. They paid the fine and were deported form the country afterwards.

Six months later, on April 18, 2009, a drunk 27-year-old Russian man began to pick on the people sitting near him. Afterwards, the man kissed a stewardess on the buttocks. The woman showed no reaction to the action, which gave the man an incentive to proceed. He put his arms around the woman and bit her in the shoulder. Other stewardesses pulled the insane man away from the awed woman.