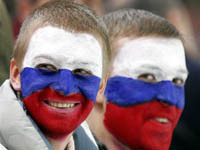 The index of social well-being of the Russians tracked by the monthly polls in November rose sharply and nearly reached a record high for all years of observations. There has also been an increase in the number of people who positively assess the political and economic situation in the country and those who believe the country is developing in the right direction. At the same time, the level of satisfaction with their own lives that somewhat grew in October, has declined in November along with the assessment of people's own financial situation.

The index of social optimism hit a record in November growing by 9 points compared with the previous month and reached the annual maximum (65). The all-time record in terms of this indicator is 68 points. The question "Do you think that next year you (your family) will live better or worse than now?" provoked the following reaction from the Russians. 29 percent of respondents believe that they will live much better. Such a high rate was observed only in July. The number of people who believe that there will be no change in their quality of life somewhat declined. In January, February and May this was the belief of 50 percent, and in August - 52 percent, in November the number was 48 percent.

However, the number of pessimists has also significantly decreased. In January, April, May and June 16 percent of the respondents believed that their lives in a year will be much worse (in September this number was 19 percent). Yet, in November only 12 percent of those who participated in the survey thought this way.

The index of the assessment of the economic situation in Russia has grown significantly. If within a year it was normally at 18, 21, 22, 26 points, in November it has reached 36 percent. This was not only the first case this year, but the first one in the post-crisis period. In November of 2008 the record was 38 points, while the highest number was observed in November of 2007 - 50 points. The current growth of positive assessments of the economic situation has occurred mainly due to a small increase in the share of optimists and decline in the share of pessimists. However, the majority of respondents (56 percent) estimated the current economic situation in the country as average.

Another record in November was the index of the vector estimate of the overall development of the country. The last five months it had been at 40 points, but in November it jumped to 45. A year ago the number was approximately the same - 47. It was at the highest level in November of 2007 - 51. This month, the number of optimists and pessimists somewhat equaled - 24 percent and 25 percent, respectively. The number of those who have a "weighted average" position during the year ranged from 42 to 48 percent.

Valery Fyodorov, General Director of the organization that conducted the poll explained the sharp jump in the level of social optimism in the odd month by pre-election situation (the survey was held in November). "On the eve of the election a lot or promises are being made, and the authorities are trying to create a positive informational background," said Fedorov.

However, apart from elections that do not happen that often there are a number of other factors affecting the attitude of the citizens. In the first place, it is seasonal: in summer the view of the world becomes much softer and kinder. In the fall, when many return from their summer vacations, the mood again goes down. In December, people traditionally believe in miracles and are in a good mood.

These monthly polls of the level of optimistic have been held since 2005. It was the year of the monetization of benefits that has become a point of reference for the attitude of Russian citizens. Until the summer of 2008, the public attitude index had been growing. Then the global crisis intervened, and all indicators have fallen and remained in this state until the summer of 2009. Then again, there was some growth that lasted until August 2010 and continued through the fall - at that time there were talks of a second wave of crisis. Now the trend has changed again as apparently the expectation of the second wave was somewhat delayed.

The index of satisfaction with people's own life does not fit the picture very well. The question was: "To what extent are you satisfied with your life?" After rising by four points in October, in November this indicator fell by two points (from 45 to 43). The number of optimists and pessimists was equal and accounted for 28 percent each, while 43 percent have chosen the golden middle.

But here is an interesting point: the degree of satisfaction with life has nothing to do with the assessment of economic situation and the vector of its development. For example, in November of 2007, when the rates were very high, the satisfaction index was at 41 points. In 2009 it reached a record 51 points. However, at the time the country was just beginning to get out of the crisis. Apparently, this made people so happy that it was bound to affect the life satisfaction index. Hence the conclusion - in order to truly appreciate your own life and enjoy it, you must first get to the crisis, and then successfully get out of it. All other estimates by and large are emotions that are subject to change depending on the weather and TV broadcasts.