Guimbarde, or Jew's harp: The musical instrument of the globe

The museum of global significance is arranged in a common residential building. This is the museum of the guimbarde, or homus - the national musical instrument of Yakutia. The guimbarde can be found in many other countries of the world - from Portugal to New Guinea. This is an instrument of many names. The world's only museum of this instrument is situated only in Russia's Yakutia. Pravda.Ru correspondents visited the museum to find out more about the remarkable instrument. 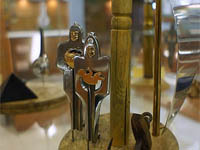 Anna Bubyakina, the chief guide of the museum, said that the Museum of the guimbarde was the only museum about this unusual instrument in the world.

More than 200 countries of the world have this instrument. It is unknown where the instrument appeared for the first time - there is no historical evidence to find that out. In this museum, you can find the guimbardes of various nations of the world. We have the African, the French and the English guimbarde or Jew's harp. Iron cost a lot during ancient times, and the guimbarde was supposed to be be made of iron. Only wealthy people could afford the instrument. Common people had to make wooden guimbardes.

What was the point of this instrument? The ancient Yakutians used the instrument for their communication. The guimbarde is the only musical instrument, which could transmit human speech. Angry women would quarrel, young women would tell their secrets, lovers would play it to express their feelings to each other. In Asian countries, young men would ask girls out for dates with the help of the guimbarde. Women were afraid of loud music in Muslim countries, so they used the guimbarde.

Beginning with the XVII century, Yakutia became the prison without bars in tsarist Russia. They'd send Decembrists and other prominent people there. During the Soviet times, they started to make collectable guimbardes. There were Victory Day and Lenin Order guimbardes made. The homus was a ritual instrument for Yakutian shamans. It is still very important for them. This instrument is capable of uniting the people of all races and beliefs.

International cultural events devoted to the guimbarde take place in Yakutia on a regular basis. This summer, for example, musicians from 20 countries of the world came to Yakutia to take part in the musical festival.

In Scotland, the guimbarde is known as the trump. In Norway, it is muharp. In Finland - muniharpu, in Estonia - parmupi, in Slovakia - trombola, in Hungary - doromb, in Germany and Austria - mautromol. The French also have their national guimbarde. The instrument was very popular in Europe in 18-19 centuries. The French guimbarde looks like the Yakut one. The instrument is called birinbau in Portugal, drymba in Moldova and vargan in Russia.

There were times in Russia's history, when homus was forgotten. The guitar became much more popular in the country during the 1940s. Nowadays, it is considered a fashion trend to play vintage instruments. Many young people play the homus, some arrange family ensembles. Many students from Moscow, St. Petersburg and other Russian cities, who come to visit Yakutia, buy the homus and learn how to play it (YouTube video).

Guimbarde, or Jew's harp: The musical instrument of the globe