"This is the page of a total fa****! Why do you need such a friend? He sleeps with men for money!" This message is still posted on the personal page of the 22 year-old resident of Russia's Sochi, Dmitry Krasnov. The young man killed himself four days after the message appeared on his page in a popular social network. 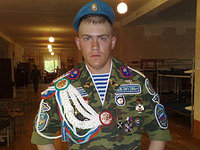 Dmitry was a bubbly young man. In 2007, it was him, who offered his classmates to celebrate their school graduation in a sauna. In the middle of the party, the guys decided to call a prostitute.

The girl's name was Marina. She was 29. No one could even think that she and Dmitry would have a relationship afterwards. The man went to serve in the army after school, but soon realized that he was missing Marina terribly. He was counting the days to meet her. He would send her love letters. Marina would write him back saying that she quit her disgraceful occupation. She said that she was wanted to get married, start a family and have children. Marina did not know that her letters could only hurt Dmitry: he could not have children for health reasons. The young man did not know how he could explain it to his woman.

"Two months after his return, Marina told him that she was pregnant. He gave him the test with two red stripes on it. Dmitry was shocked, of course, because it was impossible. Afterwards, he found out that Marina was still working as a prostitute for rich clients. She supposedly had no other choice because she could not do anything else. So Dmitry refused to acknowledge his fatherhood," Pavel, Dmitry's best friend said.

Dmitry and Marina broke up. However, the woman did not want to end their relationship. She would call him and beg him to forgive her. She once called Dmitry's mother and asked 4,500 rubles for an abortion. The woman said no, but Marina said that she would tell everyone that Dmitry was sleeping with prostitutes. The woman gave her the money, but Marina did not want to leave Dmitry alone. She created a profile on a popular social network and started sending messages to Dmitry's friends telling them that he was gay. She said that she had seen the guy in bed with another man, which supposedly ended their relationship.

"I received that message from her too, but I just told her to back off, you know. I told Dmitry about it, and he said to me that he was getting calls from his friends who were wondering if it was true. Dmitry had served in the airborne troops. He said that his army pals would not get such a joke. He was crushed. I told him not to take it personal, that everyone knew what kind of a girl Marina was. It seemed to me that he calmed down. Four days later I was told that he had hung himself," Pavel said.

Police filed a criminal case against Marina in accordance with Article 110 of the Penal Code - "Incitement to Suicide."

"The woman did not plead guilty at once. She told us everything when we collected enough evidence against her," a police officer said.

The woman may face a prison term from three to five years.