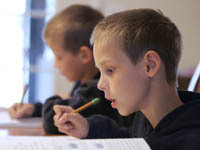 Remote, or long-distance education, does not surprise anyone now. Officially, the methods of remote education technologies were approved in Russia on May 6, 2005. However, the Russians began to use these technologies during the 1990s, even though the Internet was underdeveloped in the country. Russia had a very small percentage of Internet users back in those years.

In Russia, the Internet was born in September 1990, when the first national .su domain appeared. Four year later, another domain appeared for Russia - .ru. On September 25, 2010, the .ru zone overcame the level of three million domain zones. In 2011, the Russian Internet will celebrate its 21st anniversary.

Internet technologies gave many Russians an opportunity to use the option of long-distance education. This option is a dream for those people who lived in the pre-Internet times. They can only be jealous of the students who live and study in the 21st century. The new generation can receive knowledge literally in bed. Many have laptops, which they can carry anywhere they go, and connect them to the Internet via Wi-Fi.

Many Russians remember English language correspondent courses, which were very popular in the country during the 1990s. The courses were organized by the European School for Correspondence Courses. All the necessary materials - textbooks, notebooks, audiotapes, etc. would be sent to students by mail. It goes about regular mail, of course. A person would have to pay for the course, study the topics, do all the necessary exercises and then send them back by mail. The teacher would check the tasks and approve or disprove the next level of studies.

Such programs still exist, although they did not have analogues during those years. Nowadays, remote studies have become one of the possible forms of education in practically any college.

This form of education is capable of solving many educational problems. It also gives many people an opportunity to study even if they are physically unable to attend college.

In 2011-2012, this form of education will become available for children in delicate health in the Omsk region of Russia. Leonid Polezhaev, the governor of the region, said that many children would thus be able to access resources of education despite their place of residence on their health conditions.

For the time being, the project targets those children, who often skip school because of their health. The project will receive further development and will be available to the children with limited opportunities by 2014 too.

Remote studies have already been introduced in such remote territories of the Russian federation as Kamchatka, Yamal and Yakutia. In Kamchatka, the project began to develop in 2008. In Yamal, the project targets disabled children as well. Last year, 31 children from Noyabrsk and Urengoi took part in the course of remote studies. The project will continue to develop until it embraces all districts of Yamal. Over 11 billion rubles have been assigned for the purpose.

As for Yakutia, there is a special remote studies institute in the republic. The institute was established in 1996. Many people who live far from the regional center had an opportunity to receive higher education. The technologies for remote studies for disabled children were put into practice a short while ago.

The Center for Remote Education for Disabled Children is a state-run educational institution. The center was established within the program of implementation of priority national "Education" project for 2009-2012.

Remote studies have their variations. People can choose the variants they like most to avoid monotonous routines in their education. One may distinguish chat classes, with the use of chat technologies. There are also web classes. They are remote classes, conferences, seminars, business games, lab works and other forms of school classes conducted with the help of the world wide web. There is no synchronized communication in this form of education. It takes place on special forums, where students can ask their questions to teachers and receive comments.

There are also televised conferences. Such classes are not widely used, but they can bring together a large number of students living in different cities, districts, countries and even continents.

There is also another option, which has not been put into general practice yet. This method of teaching can be good for disabled children only. It goes about the method of so-called tele-presence. Not so long ago, Russia has launched the development of R.Bot 100 robots. The serial production of the robots has not been launched yet (one robot costs $100,000), but the new equipment is being tested already.

The experiment was conducted at one of Moscow schools. Stepan Sopin is unable to attend classes at school for health reasons. The boy suffers from lymphoblastic leucosis. The problem of his education was solved with the help of telecommunication technologies. The boy stays home and he uses his computer to hear, see and talk with the help of the robot. A teacher asks him questions and he answers them. The teacher can see the boy as well in a screen. If the results of the experiment are successful, the method will most likely be used for disabled children.

This is a novelty for Russia. In Canada, such robots have been in use since 2000.  Nowadays, students may have private lessons with their tutors via Skype. Such classes save time for both people and create the illusion of physical presence.