Moscow air is not the worst in the world 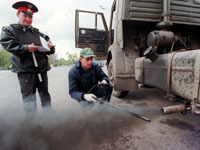 Residents of Moscow may take a breath of relief. The ecological situation in the city is not perfect, of course, but it is not that bad either in comparison with other large cities. Moscow was ranked fourth on the list of polluted world capitals. Motor transport causes the largest damage to the ecology.

Experts from the Moscow-based Institute of Ecology compared the ecology in seven other million-plus cities: Kiev, Paris, London, Stockholm, New York, Prague and Hong Kong. The research was conducted to find out the content of carbonic oxide, nitrogen dioxide, sulphur dioxide, so-called technical ozone and suspended particles in the air.

To understand the dynamics of changes in the ecological situation, the researchers studied the data for the recent ten years. Surprisingly, they came to conclusion that the content of hazardous substances in the air has been decreasing in all of the above-mentioned cities. For example, the average annual content of carbonic dioxide (the basic component of car emissions) in the air of Moscow and Prague has halved during the recent six years (1.8 times in London and 1.5 times in Hong Kong).

It is worthy of note that Muscovites must be grateful to cloudy weather. Hot and sunny weather results in the production of another hazardous substance from car emissions - technical ozone. The concentration of this compound in Moscow is one of the lowest too.

The research revealed that the air is the cleanest in Stockholm. The list continues with Paris, Prague and Moscow. New York and Hong Kong take the last two positions on the list.

One should bear in mind the fact that the rating only represents the picture in general. If scientists conduct a more detailed analysis of the ecological situation in Moscow, the picture is not going to be encouraging. Motor transport provides 90 percent of atmospheric emissions in the Russian capital. The concentration of harmful substances in the areas adjacent to Moscow highways exceeds the norm at least twice.

According to Elena Kornevaya, it is much more difficult to reduce car emissions than the emissions from industrial enterprises. The share of enterprises in the air pollution is not large at all - 3 percent. There is a special service in the city which monitors the work of factories and analyzes the condition of the atmosphere.

As for the motor transport, the situation is much more difficult. The measures to improve the situation include the use of ecological fuel and giving incentives to people to use railway and even water transport instead of personal cars.

In general, the ecological situation in cities also depends on climate conditions and relief. Stockholm, for example, sits on many islands, so the city gets aired all the time. The relief of Moscow includes hills in the north and in the south and a hollow in the center. The flower of the winds is directed from the north-west to the south-east. Therefore, it just so happens that the noxious emissions concentrate in the center and then move to the south and the south-east of Moscow.