World's highest buildings appear on the threshold of tragedies 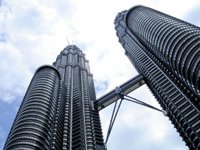 Some time ago the United States was called the country of skyscrapers. Today, tall buildings spanning a few dozen floors can be seen around the world. These "ant hills", as a rule, house offices, commercial and financial centers. High-rise buildings have always been considered a symbol of prestige and this remains to be the case even after the September 11 events in New York.

In 1885 the first building 55 meters tall appeared in Chicago. It belonged to "Home-Insurance" company. Yet, in 1913 this record was more than beat by New York Woolworth (241 meters). External structures were made of glass and aluminum, which allowed attaining the height of 400 meters.

In the 1920s architect Le Corbusier introduced new designs of high-rise towers. His buildings looked thin and graceful as a needle. In 1951, the forerunner of modern skyscrapers - Empire State Building - appeared in New York (380m in height).

Other countries followed the suit. In 1975, Canadians built a skyscraper of 553 meters tall. In 1991 in London the so-called Canary Wharf (236 feet) was erected, and in 1998 in Malaysia the construction of concrete Petronas towers was completed (425 meters).

Meanwhile, many specialists say that high-rise buildings adversely affect the ecology, have a depressing effect on people's psyche and are not very reliable in case of earthquake or fire. But who listens to the scientists? Yet, there have been a number of disasters associated with skyscrapers. For example, a memorable fire at the Ostankino TV tower in Moscow in August of 2000 that claimed several lives. A real tragedy that shocked the world took place in New York on September 11, 2001, when the twin towers have collapsed.

Can we think of these facts as of a coincidence? Parapsychologists claim that from the energy prospective, high-rise structures are far from perfect as they have a strong impact on geopathic zones. That is why the wise Chinese have created a system of protection against the fatal energy - Feng Shui

It is customary in China to hang a magical "mirror of Bagua" surrounded by particularly symbolic images on the front door. Convex and concave mirrors that allegedly reflect the world "in its perfect view" are meant to divert the negative energy. In the 1970-1980s, when Hong Kong began to erect high rise buildings, a real "Mirror Wars" was launched. People installed huge mirrors on the fronts of their houses. The governor was even forced to issue a special decree regulating the maximum size of front mirrors as they distracted the drivers and caused numerous road accidents.

However, the end of an era of skyscrapers, apparently, will not come soon. Scientists are developing environmentally friendly buildings that will house a new generation of energy sources - solar panels or turbines rotated by the wind. The towers will be designed to clean the air of contaminants.

Destruction of the World Trade Center did not suspend construction of skyscrapers. To date, there are over 2,470 buildings with the height of over 150 meters. The tallest skyscraper "Burj Dubai" was built in 2009 in Dubai (United Arab Emirates). Its height is 828 meters. The second tallest building is Taipei 101, built in 2005 in Taipei (508 meters). The third tallest is The Shanghai World Financial Center built in 2008 (492 meters). Currently approximately 600 skyscrapers are being built around the world. The height of 55 of them will exceed 300 meters.

People do not have enough space for their activities, and such "ant hills" are considered a good thing, particularly in large cities. Nobody thinks about the fact that high-rises turn into a risk zone during terrorist attacks and disasters.