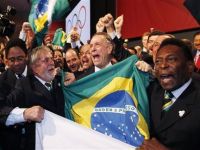 The organizations said that families in dozens of the city's low-income areas have lost or are at risk of losing their homes as the authorities build infrastructure for the international sporting event.

"Forcing families out of their homes without adequate notice, prior consultation with those affected and without offering adequate alternative housing or provision of legal remedies flies in the face of the very values the Olympics stand for, and violates Brazil's laws and international human rights commitments," said the organizations.

"The Olympic organizers should use their influence to put an end to this practice now, before it's too late. The IOC must not be complicit with human rights abuses carried out in its name, and should publicly and unequivocally condemn all forced evictions in Rio de Janeiro."

Favelas and informal settlements around the city have already been affected over the past year and more are slated for future planned evictions by the authorities.

Key infrastructural works, such as the construction of three express bus lanes (the TransOeste, the TransCarioca and the TransOlímpica), works around the Maracanã stadium and the modernization of the port area have already led to serious violations. As these works continue, several communities - including Vila Autodromo and Arroio Pavuna - are now fighting imminent eviction.

Although Rio de Janeiro's officials maintain that no forced evictions have been conducted and that all families are being appropriately compensated before losing their homes, independent research by local NGOs, Rio de Janeiro's Public Defenders' Office and international organisations including Amnesty International and WITNESS has proven otherwise.

In the gravest cases, the authorities have arrived in a community without prior notice and begun tearing down homes and businesses.

On 22 October 2010, bulldozers arrived at the Restinga community and began demolishing homes and small shops that had operated in the area for more than 20 years.

"At 10:00 a.m. there were machines, police officers, riot forces with large weapons and they started emptying out the houses. If someone refused to leave they would take the bulldozer and start breaking down the door. The officers would come into the house, take those inside out by force and then demolish it."

Many of the families that used to live and work in Restinga have since lost their jobs and sources of income, while children from the community have been unable to transfer to new schools, resulting in months of missed education.

This pattern of abuse has been repeated in other communities over the past year, with authorities often putting pressure on residents for months on end to accept sub-standard offers instead of following procedural and legal safeguards before evictions take place. The harassment is seen as a tactic to coax families to relocate in most cases to remote areas, far from their jobs, schools and community.

The situation became so severe earlier this year that the United Nations Special Rapporteur on the right to adequate housing, Raquel Rolnik, intervened to demand that the Brazilian government "stop planned evictions until dialogue and negotiation can be ensured".

"We recognize that Rio de Janeiro's authorities need to install adequate infrastructure to ensure the success and safety of the 2014 World Cup and the 2016 Olympics," said the organizations.

"But this must be carried out in a spirit of consultation and collaboration with the affected communities, to ensure that their rights are protected in the process."