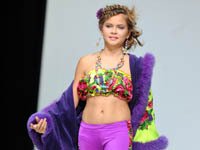 Nowadays, children can be very expensive in the truest sense of the word. Modern children can earn a lot more than their parents can. They can get this opportunity in the modeling business for children, for instance. Many parents dream of hooking their kids up in the fashion industry in a hope to live happily ever after.

If it happens, it is not going to last long. The professional age of juvenile models is a very short one. When small children become teenagers, they pose no interest to advertisers. Very few of those children will be able to continue their careers in the adult life.

Meet Igor. He works as a driver in a large company. He is happy with what he has, but he would like to give his daughter a lot more. Igor has a plan, which he is going to use to give his little girl an opportunity to do something in this life. His daughter is beautiful, and she can profit from it, the man believes. He shows professional photos of his daughter to all of his passengers.

The photos produce a strange impression. A cute seven-year-old girl looks like a grown up young woman. She wears heavy makeup, her hairstyle is far from being childish, her dress is low cut, her shoulders are bare. A normal person will find such images disturbing, to say the least. Igor does not see anything strange about it. The loving father took his daughter to the photo studio and it was the professional photographer, who chose the image and the outfit for the little girl. All that Igor wants now is to receive an invitation for professional photo shoots.

Up to 300 parents register on the website of children's modeling agency President Kids. All of those parents dream of the glamorous future for their children. Tens of them come to the agency personally. Some of them are sincerely interested in giving their children an opportunity to fulfill themselves. They are happy to see their children's success and they do not shout at them if something does not work out properly.

Many other parents simply want to make money on their kids. "We had a lovely-looking woman who came into my office and said point blank: "I was looking for a father for my daughter for three years, I gave birth to a beautiful child, and now I want to get my money back." I was shocked to hear that! I couldn't hold it so I asked her whether she was trying to sell the girl's organs to get the money back. The lady got offended, of course. I was indeed shocked that the woman was speaking about her daughter as if the child was a thing that was up for sale. And she was saying all that in her daughter's presence," Valery Sorokovoy, the director of the agency said.

It is absolutely natural for the majority of parents to dream of better lives for their children. Some parents try to use their children in doing the things that they failed to do in the past - to take high positions in the society and solve financial problems, for example. During the Soviet times, such arrogant parents would take their children to music schools and sports sections.

Times have changed. Nowadays, children can make very good money in early childhood. During the 1990s, when Anna Kournikova and Maria Sharapova became famous in the world of tennis, everyone was discussing their multi-million incomes.

Thousands of young parents rushed to take their children to tennis schools in a hope that their son or daughter would become just as successful. Some would be ready to even sell their apartments just to be able to pay for the tennis classes. They wanted the coaches to work as hard as possible with the children.

No one has seen the new Kournikova or the new Sharapova yet. The majority of children apparently failed to stand the pressure from their parents. The parents apparently realized that one had to have talent to succeed.

As for the modeling business, many adults believe that it does not require any investments. You have a pretty face, so it is the face that can make money.

"Many parents are certain that having a cute child is enough. They do not realize that it is far from being enough. A model needs to know how to act in front of the camera. That's why we teach models choreography and many other things that they need to know how to do," Valery Sorokovoy said.

Little models enjoy very good demand on the market. One day of work for a catalogue of children's clothes brings a child model the profit of up to $400.

The modeling business for children does not have the tough selection that the adult modeling business has. Adult models have to meet the requirements of certain standards of modern beauty. No one sets forth such requirements to children. "Customers want child models to look natural. They do not need the children who look like adults," the director of President Kids said.

Any good-looking child may try to become a model. The market gets renovated all the time because children grow and change very fast. Small children from three to five years of age enjoy the biggest demand. If a child is older, then he or she is not so attractive for the advertising business.

This is the time when parents make their children act like adults do. They make those pictures on which children look like grownups. Parents try to skip through this age, which the advertising business does not need.

The story of French child model Thylane Blondeau is very indicative at this point. The ten-year-old French girl appeared in the August issue of Vogue magazine in a very provocative photo shoot. On the photos, the little girl looked like a grown up model. She wears heavy makeup and seductive clothes as she takes provocative poses on the couch. The photo shoot triggered an international scandal. However, the girl's mother claimed that the media were blowing things out of proportion: her daughter did not pose naked, the woman claimed.

Many people found the photos disgusting.  Many others said that they did not see anything bad about the girl dressed as an adult woman. Indeed, little girls want to look like their mothers. Little girls want to use their mothers' makeup and try on their dresses. However, there is no child in the world who would strike sexy poses and make bedroom eyes for the camera. Only adults can teach a child how to do it.

There are many websites on the Russian Internet, where parents, presumably mothers, also publish the photos of their children hoping that their kids will be noticed. Some of those photos may raise eyebrows.

"One day, I saw there a picture of a five-year-old girl. The girl was wearing makeup and she was sitting spread eagle. I posted a comment to that photos in which I said that her mother could be called into criminal account for posting such a photo, but other people showered me with indignation in return," Valery Sorokovoy said.

As a rule, it is professional photographers who recommend such poses as they work on a professional portfolio for a child. A portfolio costs from 30 to 60 thousand rubles in Russia ($1,000-2,000). "Professional" photographers recommend making new portfolios every two months. They can make very good profit until parents finally realize that their daughter is not going to become another Thylane Blondeau.