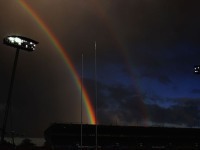 A miraculous rescue of the seven-year girl in Novosibirsk, Russia, led to the thought of ​​miracles in general. Doctors of Novosibirsk Regional Hospital did something quite incredible - they extracted a pneumatic rifle bullet from the center of the girl's head. She was shot right in the eye by an 11-year-old boy who was playing with a dangerous weapon.

The injury looked scary to both the girl's family and the doctors who saw on her X-ray images that the bullet passed through the eye into the head.

Vesti TV channel provided details of the surgery that perhaps was the most complex surgery performed in that Novosibirsk clinic. The doctors could not leave the bullet in the girl's head as it would trigger inflammatory process.

The doctors had to act fast. Craniotomy is a very difficult and traumatic surgery with unknown consequences. Weighing all pros and cons, the Novosibirsk doctors have chosen a different strategy. They decided to extract the bullet through the nose with an endoscope. The lead bullet from a standard pneumatic rifle hit the girl in the right eye, but went diagonally and has not affected the optic nerve.

The doctors have miraculously managed to pull the bullet out of the girl's head. The little patient will be able to see. The bullet has not affected the vital parts of the brain and all the blood vessels are intact.

Similar cases were reported earlier. World War II veteran, a military doctor, a colonel of medical service, retired head of one of the first evacuation hospitals of the Belorussian Front Semen Bats shared his memories with a correspondent of "Pravda.Ru":

"An evil fate, of course, pursued our troops since the beginning of the war, and I do not remember any miracles in its first part. But somewhere after the Kursk battle, I began to record rare cases of wounds of our soldiers and the miracles that have been associated with the injuries.

I remember a soldier who came to our military hospital with a speck on his head. It looked nothing like a hole from a bullet ... He did not complain, his friends just asked to put some bandages on him. When his wound was checked with a probe, it appeared that there was something hard inside. Our chief doctor came, gave the soldier a glass of diluted alcohol, then just pulled a bullet from a German rifle from his head with the tweezers. It so happened that I've met this same soldier again in 1945 in Poland, he was wounded again in his head but survived.

Once, a young captain, tanker, was brought in our base hospital. It so happened that during a battle he was severely hit in the head by the tank hatch. The inner hatch handle broke the skull and entered the brain. The captain was fully conscious, he was even joking and tried to smoke. His friends covered the hole in his head with a dirty sheet since there were no other dressings in the tank. When we removed the sheet we could see the brain and bone fragments though the hole in the scull. Then I had to act fast - we urgently treated the wound and flown the captain to a hospital. Then it turned out that he was discharged from the hospital just three months later and still managed to fight for Berlin. The hole in his skull was covered with a sheet of thin steel.

A thirteen-year Belarusian boy, a young guerrilla, was wounded in the head when our troops have liberated Brest. A policeman's bullet hit him in his ear, entering the skull from the side. I had to extract the bullet with a simple pair of tweezers. He had a strong bleeding. The bullet got stuck in his ear, not even touching the eardrum. Unfortunately I don't know the fate of this boy, but hopefully, it was a miracle and he lived a good, long life."

There were numerous miracles in the second half of the Great Patriotic War. Amazing stories about miraculous rescue of Russian soldiers and officers will hopefully continue to live for centuries. Professor Igor Janusz, PhD, commented on the situation:

"Indeed, very are many unlikely, but actually documented cases of rescue of the Russian soldiers, especially in the second half of the war. Some scholars have attributed this to the curse that was sent to our country by Hitler and his occultists. Some tried to attribute this to the powerful egregore, that is, meaningful accumulation of bioenergetic field of information, created in Germany by the end of the 1930s. Our Army in the early years of the war had really hard times.

But then came the months when Russian people created the winning egregore that was much stronger than that of the Nazis. Of course, this could be another topic for study, but rather common stores of the miraculous escapes of our soldiers in the final period of the war may well be connected with this egregore. It was supplemented by a religious egregore (in the middle of the war Stalin abolished the "ban on priests," and rehabilitated clergy), egregore of the revenge for the deaths of relatives and so on. That is, the Soviet people became much stronger bioenergetically, and this has helped in the Great Victory."

And finally, here is a miraculous case of recovery in the Italian city of Naples. In the first minutes of the new 2011 an emergency car delivered a young man with a gunshot wound to his head to one of the local clinics. The patient was conscious, did not say anything, but looked like he was trying to sneeze. Doctors who examined the patient quickly came to the conclusion that there was a need for an urgent and complex surgery, as the wound was "blind" - a bullet got stuck in the patient's head. But then the patient sneezed with all his might, the bullet fell to the floor of the operating room.

The Italian media wrote that 28-year-old resident of Naples Darco Sangermano later claimed that he was wounded in his right temple with a stray bullet. During the initial examination, the doctor determined that the bullet entered his right temple and lodged somewhere in the maxillary sinuses. Surprisingly, the patient's right eye was not affected.

However, miracles are not an exclusive privilege of humans. In Dubai, cat Mikey survived 12 gun shots. As reported by the Arab news portals, the cat went out on his usual morning walk outside. A few hours later the animal crawled back wounded and bleeding. The cat owner counted 12 wounds on the body of her pet.

Most likely, the cat was shot nearly at point blank from an air rifle. The cat survived a four-hour surgery and fully recovered.