Could Pope Benedict XVI be a Nazi? 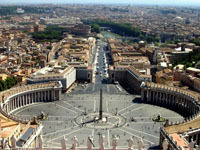 American actress and social activist Susan Sarandon publicly called Pope Benedict XVI a Nazi. The statement was made during a live broadcast. Of course, it triggered a wave of public indignation. During his television interview, Sarandon mentioned that she sent to the Vatican a copy of the book that the famous movie "Dead Man Walking" was based upon. The parcel was addressed to the Pope.  Describing this, the actress stressed that of course, the book described the previous pope, John Paul II, but not the Nazi who rules now. Actor Bob Balaban made a polite remark to his colleague. However, Sarandon reiterated that Benedict XVI will have the stigma of the Nazi for the rest of his life.

The entire United States learned that the famous actress called the Roman Pontiff a "Nazi". The U.S. Catholic League called Sarandon words "outrageous." The American Anti-Defamation League (ADL) demanded the actress to apologize to the Catholics. However, Sarandon did not return calls and ignored the press.  Sarandon's actions are indeed scandalous. The current Pope has never concealed that he was a member of the Hitler Youth organization and served in the Wehrmacht. At the same time, he has repeatedly denounced Nazism. "The European continent was in the hands of the authorities who questioned the future of Christianity," the Pope said, talking to fellow countrymen in 2008. Priest Georg Ratzinger, the brother of the Roman pontiff, said that their family has always believed Nazism to be a disaster and a great enemy of not only the Catholic Church, but all religions and human life in general.

When Joseph and Georg Ratzinger were drafted into the Hitler Youth organization, they agreed because there was no other choice. Georg told reporters in 2008 that the refusal would lead to serious consequences for their family. As a member of Hitler organization, Josef did not attend the mandatory meetings of the organization, which resulted in lost opportunities to study for free. Brothers Ratzinger deemed conscription to the army as a duty to defend their motherland. The Italian newspaper Il Giornale quoted Georg Ratzinger saying that their goals and ideals were the opposite of what Hitler preached, but it was their civic duty and they did not know when the war would be over.

The words of Sarandon about the Pope and the facts of the youth of Benedict XVI make one think: "Could a German Catholic believer be a Nazi? What was the Nazi leadership's attitude towards the Catholic faith?"

Adolf Hitler was born into a Catholic family. After becoming the Fuhrer of the Nazi party, he continued to call himself "Christian." In his speech in 1928 in Lassana, Hitler called the Nazi Party a "Christian movement" that "will not tolerate anyone who attacks the ideas of Christianity." Indeed, at first to be a Catholic believer was considered a good practice in the Nazi Party since the word "Catholic" was synonymous with the word "loyal." The image of the Nazi believer was advantageous since it appealed to ordinary Germans, the old imperial elite, and German industrialists. In many ways, "Christian" image of the Nazi Party helped Hitler to take power.

Once in power, the Nazis immediately started rewriting the Christian dogmas. First of all, they took up genealogy of Jesus Christ. The Son of God had become a preacher of Nazi ideas. Naturally, all references to the Jewish roots of Jesus were crossed out. Several theories were made up. According to one of them, Christ was the son of a Roman legionary. Another claimed that the ancestors of Jesus came from the Caucasus.  In 1939 in Eisenach the Nazis created a special theological Institute dedicated to eliminate anything Jewish. The employees of the institute crossed out all references to the Jewish role in Christianity from the biblical texts. Walter Grundmann, Director of the Institute, said that the Gospel Jesus must become the "savior of only our own, the German people." "Gott mit uns," coined on the Wehrmacht belt buckles and the Waffen-SS meant just that. God was only on the side of the Nazi movement.

"Christian" Hitler served as an honorary professor at the Institute. Soon the head of the Reich lashed out not only at the Jews but the entire Christianity. In December of 1942, at a dinner Hitler said that he would not allow the Pope to intervene in civil affairs. He added that making the State the master, he would put an end to organized lies, and there was no need to wait until the church rots. According to Hitler, the German rulers of early medieval ages forcibly imposed Christianity on Europe. The Fuhrer was proud that none of the German Waffen SS soldiers visited church and all of them still were ready to die with peace of mind.

Initially, the Nazis preserved the appearance of good relations with the Roman Curia. On July 20, 1933 a Concordat was signed between the Third Reich and the Vatican. But then the German authorities have arranged real persecution of the German Catholicism. All Catholic social organizations were dissolved, all Catholic schools and seminaries were shut down, and church books and newspapers were no longer published. The Nazi leadership was talking about a total ban on Catholicism in the Reich.  Seeing that the German party violates the terms of the Concordat, Pius XI in March of 1937 issued an encyclical condemning the Nazis. The document, titled "Mit brennender Sorge" (With great concern ") was written entirely in German. The encyclical was read in all Catholic parishes of the Reich. The Nazi authorities responded to the Vatican with persecution of the Catholic clergy in Germany. The priests were charged with crimes that varied from the anti-Nazi propaganda to homosexuality. The punishment was life imprisonment in a concentration camp.

Soon the Reich moved towards a truss with the Catholics. The termination of the concordat, which Pius XI called for, did not take place. In 1939, Pius XII became the Pope. Diplomatic relations between the Vatican and Berlin resumed and strengthened.  Berlin started a diplomatic game with the Vatican on a number of reasons. First, the Curia was a valuable ally against the Communists. Second, it was a reliable "emergency airfield" in case of failure. In exchange for loyalty, the leadership of the Third Reich promised Rome freedom in the occupied territories. Berlin fulfilled its promises. The mass Catholicism of the Serbs in Yugoslavia would hardly be possible without the authorization of Berlin.

Many prelates benefited from the Holocaust. For example, the gold looted from the Jews in Croatia and Bosnia was given to Archbishop Stepinac of Zagreb by the fleeing Nazis. The "Rat Line" that then was used by Nazi criminals fleeing overseas was established by the Vatican. At any rate, the Curia, thanks to Pius XII, became involved in the Nazi crimes.  Curia, however, does not mean all Catholics in Europe. On March 22, 1942 in Fulda a congress of the Catholic Bishops of Bavaria was held. The Declaration of the Congress was replicated in many instances throughout Germany. Bavarian Catholics accused the Nazis of the desire to "destroy European Christianity." In addition, delegates to the Congress in Fulda condemned the persecution of Jews, the practice of euthanasia, and the crackdown on freedom of speech and religion. The Bavarian opposition to the Nazis included not only most of the Catholics, but the royal family of Wittelsbach as well. Hitler could not forgive the Wittelsbach such "ingratitude." Nearly half of the royal family was in the camps.

Also in 1942 in Munich the student movement "White Rose" was formed. The movement was headed by Hans Scholl and his sister Sophia, faithful Catholics. The movement was started in response to the address of Gauleiter Paul Gisler to German female students. Gisler encouraged girls to enter into intimate relationships with his aides. Bavarian student rallies escalated into an anti-Nazi demonstration in Germany. But they were soon suppressed, and Hans and Sophie Scholl were executed.

Many Catholic priests became prisoners of concentration camps. There were entire wards of priests in Dachau. No one in the camps was allowed to openly profess Catholicism or any other religion, including the guards. Theodor Eicke, the chief of the German concentration camps, forced his SS men to renounce Christianity. Eicke used to say that the SS "must hate the smell of incense." SS and the Kapos subjected catholic priests to severe torture. In Dachau medical experiments were conducted on imprisoned priests. "Factories of Death" created by the Nazis in occupied Poland took lives of nearly three thousand Roman Catholic priests and nuns.

A number of Catholic priests murdered by the Nazis in concentration camps were later canonized by Rome. Among them are Polish Franciscan Maximilian Kolbe, a Dutch Carmelite Titus Brandsma, and a German nun, Edith Stein, Carmelite. In November of this year Austrian priest Charles Lampert who was executed in 1944 in a concentration camp at Dachau will be beatified.  The conclusion made by the European Catholics who fell under the Nazis' control is obvious. A devout Catholic cannot be a Nazi and a Nazi cannot be a faithful Catholic. It is worth considering that a Catholic family of Ratzinger thought the same way.