Buddhism and vegetarianism do not mix 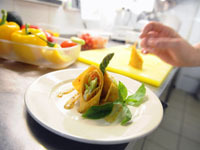 One of the most common myths about Buddhism says that Buddhists must be vegetarian. Those people, who believe so, usually mix up Buddhism with other religions that appeared on the territory of India - Hinduism or Jainism. Buddha has never urged anyone to refuse from eating meat. If you are in India, it will not be hard for you to do it, if you need to.

In Tibet, Buddhism is everywhere. However, even most religious people enjoy eating yak meat. When they wake up, they like to have a cup of local "tea" with salt, milk and animal fat. This drink is very important for local residents due to the mountainous climate. The world of plants is not rich in the region, so the primary sources of protein there is fish and animal meat.

The number of vegetarians in present-day India is a lot larger than it was during the times of Buddha. The Hindu even ate beef; the only kind of meat that they considered impure was dog meat. They condemned the consumption of such expensive and rare animal species as horses and elephants. This is justifiable from the economic point of view, of course. Buddha introduced only three bans as far as meat consumption was concerned. Eating meat was forbidden: 1) if a monk saw that the animal was being slaughtered to feed the monk; 2) if he was told that it was so; 3) if the monk was suspicious about it.

There are a dozen of other rules that ban Buddhist monks from eating certain kinds of meat. However, it goes about exotic sorts of meat, the consumption of which could be described as atrocious or even cannibalistic: the meat of human beings, horses, elephants, dogs, snakes and predatory animals.

As you have probably noticed, the bans embrace only the monks. Buddha was not willing to think of any strict rules for laypeople. He only urged them to stick to the Middle Way. He only condemned the profession of a butcher. There was another nuance. According to traditions, Buddhist monks would take meals from laypeople. That is why Buddha did not consider it appropriate to point out what laypeople should eat. Moreover, if a layperson gave a monk a piece of meat, the monk would have to eat it not to offend the giver.

A story about Buddha condemning vegetarianism can be found in Amaganda-Sutta. A secluded person, a vegetarian, came to Buddha and asked him if he ate "amaganda." The word "amaganda" literally means the "smell of flesh" and many ascetics perceived the word as "meat." What is meat if it is not flesh? Buddha asked him what amaganda was. "It's meat," the ascetic said. Buddha responded: "to kill, to beat, to cut, to tie, to steal, to lie, to deceive and to mountebank - all this, but not sarcophagy, is called "amaganda."

Buddha said that when people commit atrocities, when they are rude to others, when they don't feel compassion - this is called the abominable smell of flesh. Eating preferences have nothing to do with it. Buddha attached much more importance to spiritual pureness, the purity of thoughts and actions, rather than to food.

Buddha Shakyamuni also urged people to be careful with herbal food too: herbs, like animals, are living organisms, he taught.  That is why Buddhist monks do not pull up plants by the roots, nor do they ask anyone else to do it. Destroying any forms of life, whether it is vegetable or animal life, is justifiable only for living - not to die. Vegetarianism is no better than sarcophagy from this point of view: if you eat less meat, you eat more plants.

Jampo Tinley, a teacher of Gelug School, believes that vegetarianism is unnecessary. Meat is available for everyone and everywhere so total abstinence from meat is not going to change anything. If vegetarians believe that they save living creatures, then people would have to stop eating vegetables too - they are living creatures too. Moreover, when people grow vegetables and fruit, they kill many insects. There are many microorganisms in water, so drinking water also kills living creatures, the teacher said.

Unfortunately, we have not reached the level of development when we don't harm anyone. We should try not to cause anyone harm deliberately instead. Modern Buddhist teachers say that one should wish a deceased animal a good reincarnation before eating its meat. No matter what you eat, you survive owing to the kindness of various creatures: those who reared your food and those who died so that you could satiate yourself with its flesh. If you remain thankful to those who help you live and stay alive, it will reduce the negative karma.