Swiss police chief loses his job because of Russian woman 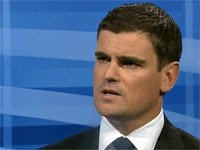 Spy mania that has recently embraced the West does not come within miles of the witch-hunt of the Cold War era. Russian people are good at stirring up international scandals. The recent resignation of the chief of the Swiss Federal Judicial Police Michael Perler because of his affair with a former Russian woman is another proof for it.

The story of a Russian woman, who married a foreigner, became a Swiss national and then dumped her husband to have an affair with the chief of the Swiss Federal Judicial Police, is not over yet. All members of the love triangle still experience the pressure of consequences of the dramatic moment in their lives. The former husband suffers from the divorce from the mother of his son and the woman he loved. The former Russian woman suffers from the problems that she caused to her ex-husband. The former police chief suffers from the fact that his career has been broken because of a woman.

In 1996, Elena T. (the Swiss police do not expose the real name of the woman), a resident of St. Petersburg, met a Swiss banker through a marriage agency. The banker came from Aargau, a canton in the north of Switzerland, presumably populated by German-speaking people.

The daughter of an officer of the Soviet army, who was born in the city of three revolutions, was working as a seamstress and was living with her parents. The woman met the Swiss banker when she turned 23. He was 46. We do not know if the couple fell in love with each other madly. We only know that the man wanted to find a housewife and a young and faithful wife.

"I had this idea in my head saying that Russian women are perfect wives. They are good at homemaking, do not have many claims and are not obsessed with career making," the Swiss banker told Blick publication.

Every Russian knows what a young woman wanted 13 years ago. Yeltsin's years of power did not change much in the country since the period of perestroika. For our foreign readers we would recommend watching Soviet drama film "Intergirl" ("Interdevochka") to get the picture.

"I visited her in St. Petersburg, and she came to visit me in Switzerland too. She visited me again in two or three weeks to extend her tourist visa. I told officials that I was going to marry her. This is how I took her to Switzerland," the man told reporters.

In 1997, the couple got married. Two years later, they became parents: Elena gave birth to a baby boy.

"Elena quickly showed her independent temper and began to meet other Russians who were living next door. She would often spend evenings with them. I did not like that, but I didn't want to be her guardian," the Swiss banker said.

In 2002, Elena received a Swiss passport. Her marriage began to fall apart at the seams instantly. In 2004, Elena T. moved out from her husband's apartment and filed for divorce.

"Well, I believe it's all about the age difference. I am 23 years older than her. And she would very often communicate with younger people," the 61-year-old man said.

Eighteen months ago, Elena began to have an affair with Michael Perler, the chief of the Federal Judicial Police. The high-ranking official would take his girlfriend along on his business trips to Russia. He was supposed to make Elena go through the process of all-sided inspection for security reasons. However, the man did not even inform his bosses of that. He violated the instructions and was sacked.

The former spouses are still in contact with each other because they have a child.

The relationship between the divorced woman and the police chief were put to an end six months ago. Swiss reporters wonder whether the police chief decided to break up with his Russian girlfriend to keep his position.

It seems that Elena's ex-husband knows the answer.

"Elena told me that she was sorry for Michael. She said that he apologized to her. She believes that he shouldn't have lost his position because of that," the man said.

Ninety-three percent of employees of the Swiss Federal Judicial Police expressed their solidarity with their chief. Many Swiss newspapers publish readers' letters in which people express their sympathies to him. As a result, it was reported that Perler had been dismissed from his position temporarily and sent off for a holiday. The paid holiday may last till October 31, 2012.