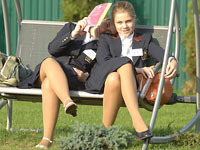 Nowadays, women can serve in many armies of the world, and the Russian army is no exception. A second military school for women is to open in St. Petersburg after 2012. The first school for military women appeared in Moscow in 2008.

The positive experience of the first educational military institution for girls prompted the creation of another school in the country - in St. Petersburg. All the graduates of the Moscow military school entered colleges.

Igor Kartashov, a Candidate of Military Sciences, believes that the question of women in the army is not new for Russia at all.

"In tsarist Russia, women were not allowed for army service. Women were only allowed to perform their natural function during those times - motherhood. There were only several women, who took their gender as a mistake of nature, and tried to enter the army service under the guise of men. At the end of the 18th century, Sasha Tikhomirova commanded the company of uhlans by the name of her brother Alexander. Tikhomirova had served in the cavalry for 15 years. The first female officer in Russia, the daughter of Hussars captain of cavalry, Nadezhda Durova, joined the army in 1807 by the male name of Sokolov.

"For the first time in world history, women were allowed to serve in the army just like men, without any professional restrictions, in Canada. It happened in 1895. Russian women could get such a right only if they passed themselves off as men. For example, Olga Shidlovskaya, a hussar, served as Oleg Shidlovsky. Antonina Palshina, a holder of two St. George's Crosses, was serving as Anton Palshin.

"Russian women would find themselves in the army during the times of the Civil War and the Great Patriotic War. They mostly served as nurses, radio operators and typewriters. Many women served as snipers and pilots.

"After the war, women continued their army service on their previous positions, but the quantity of military women reduced considerably. After the breakup of the USSR, Russian officials decided that Russia should not lag behind Western Europe when it comes to the number of women in the army.

"Many women responded to the initiative. As a result, one may say that the Armed Forces of the Russian Federation are made of women on the level of ten percent. Russia has thus achieved the level of the countries of Western Europe at this point.

"Many women in the army already hold military titles. Some of them even serve as generals. In 2008, Vladimir Putin signed a decree, which gave an opportunity for underage women to study at Suvorov schools and "Nakhimov naval schools.

"As for women being the weaker sex, they are only physically weaker than men. However, they compensate the lack of physical strength with discipline and high skills. Women are more enduring than men. For example, the record for swimming the longest distance belongs to a woman. In addition, they are more stress-resistant than men. Women have mastered all civil professions and occupations that traditionally belonged to men. Now they want to serve in the army and there is nothing surprising about it.

"In 2009, President Medvedev supported the experiment to welcome the weaker sex in military schools. Twenty women became the students of the well-known airborne military school in Ryazan. The president had a special meeting with the new students. He said that if women wanted to serve in the army, then one should create all necessary conditions for it. If women are interested in it, then the army could only benefit from it."