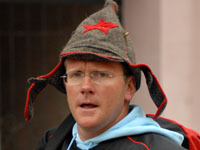 New 25-storied inexpensive three-star hotels will appear in Moscow. The Moscow government is trying to increase the tourist flow in the Russian capital. The goal is to have a twofold increase within the forthcoming several years.

For the time being, Moscow does not seem to be a very attractive city for foreign tourists. Sadly enough, the Russian capital does not attract many Russians either. The home tourism in Moscow develops slower than in Nizhny Novgorod, for instance.

A friend of mine, an Italian woman, asked me once what places of interest I would recommend her to visit in Moscow. I have to say that her question left me perplexed a bit. I didn't want to recommend the Lenin's Tomb, although it could probably be of interest for foreign tourists - to take a look at the mummy of the world's greatest revolutionary.

The friend arrived in Moscow in summer, so we took a pleasure boat ride on the Moskva River. However, in this situation a foreigner will only have the pleasure to enjoy the views. There are no boat excursions in foreign languages: the required technical means are not provided for it.

Nikolai Koziorov, the director of ArtistSpace, a Moscow travel agency, also thinks that Moscow is not very friendly towards foreign tourists.

"All signs are only in Russian. There are no tourist buses with excursions in foreign languages. Such excursions would be great for those tourists who travel alone. The biggest problem is the absence of cheap hotels that would charge 100-120 euros a night," the specialist said.

Indeed, Moscow hotels are one of the most expensive in the world. In 2010, Moscow hotels were recognized world's most expensive, and it happened for the sixth consecutive year. The cost of a room in a Moscow hotel makes up the average of $415 a night. It is obvious that Moscow targets top-level businessmen in the first place. It just so happens that tourists are not a priority for the city.

It appears, though, that the Moscow government wants to change this situation for the better now. Last week, the city government announced a competition for the projects of typical three-star hotels. It goes about high-rise buildings - 25 stories.

The appearance of such hotels in the city is a correct decision to make, of course, but it is definitely not enough. At the end of the day, hotels in Paris and London are also very expensive. According to TripAdvisor, Paris is the most expensive place for a tourist to stay. A night at a four-star hotel, pizza with cheese, a glass of martini and a taxi ride will cost a tourist $429. In London, the package is a bit cheaper - $374. Strangely enough, Moscow was ranked seventh with $345.

However, high prices still make London and Paris tourist meccas. As of 2005, London was visited by 13.9 million people. Moscow is too far behind. Even if the Moscow government successfully achieves a twofold increase of foreign tourist, it will give the number of 6.8 million people. Nowadays, the Russian capital welcomes as many as 4 million foreign tourists a year.

Why is London so expensive? The visitors of TripAdvisor said that the British capital was the most interesting city in Europe. For many people, visiting London also means a lot of fun. Therefore, tourists believe that the game is worth the candle, so they are ready to pay for it.

Moscow will have to think a lot to compete. "Moscow loses the competition with many European capitals because there are not many places to visit in the city. Nothing new has emerged during the recent years either," Anna Trapkova of the Institute of Regional Politics said.

It seems that the Moscow government is aware of the problem. It has been recently reported that Moscow may build a Russian Disneyland on the place of the Tushino airdrome. If this idea becomes real, the number of foreign tourists visiting Moscow will increase considerably.

Moscow remains the only large capital that does not have its own theme parks. According to Forbes magazine, four Disneylands - in Paris, Tokyo, Florida and California - are the most visited places in the world.

A theme park does not have to be a cartoon-themed park. South Korea, for example, has theme parks based on TV series. There are as many as 50 such parks in the country already. Korean TV series are popular in China and Japan. This attracts crowds of Japanese and Chinese tourists to the country. Six million people visited South Korea in 2005, and 1.2 million of them came to the country to attend the theme parks.

It is worthy of note that PricewaterhouseCoopers included Moscow on the list of world's 26 cities in "Cities of Opportunity 2011" research. According to the company, great cities remain such just became they constantly create opportunities for interaction between man, art and culture.