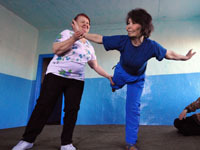 Most of us will live long lives. It has to do not only with the increasing level of comfort and the development of medicine. The body itself is set to a long life, producing mutations in the genes. The old patterns of behavior at a certain age will no longer work. Residents of the developed countries have to think what they will be doing for 20, 30 or even 40 years after retirement.

A few days ago the scientific community announced a surprising fact. A group of scientists from the Netherlands deciphered the DNA of a person who managed to live to 115 years. Not only had she managed to survive, but she also retained sanity and physical strength that is much more important. As scientists say, watching her a few years before her death, in her old age the woman looked like she was at least 50 years younger. At the age of 113 she was tested for mental capacity, and her results corresponded exactly to those of a person of 65 years of age.

Rare and unusual changes were discovered in the genome of the woman. Scientists believe that they protected her body from aging and all of its troubles - such as Alzheimer's disease. Biologists from the University of Amsterdam told the BBC that these mutations may be the very gene of longevity.  This changes everything. It turns out that the secret of a long and healthy life is not in the environment, fitness or nutrition. The very nature prepares the human body to the fact that it should live long. Not without reason, many scientists concerned with the issues of longevity are confident that vital resources are meant for 120-130 years. It is unclear what exactly triggers those gene mutations. Maybe, the ecology and nutrition do the trick as well as the interest in life itself.

The answer to this question is in the near future. Throughout the world, and especially in the developed countries, the population is aging rapidly. In terms of demography, the population is considered old if the proportion of people older than 60 is eight to ten percent of the total population. Today, in many European countries, this number is exceeded more than twofold. In Austria it is 20 percent, in Italy - 24 percent, and in Sweden - 23 percent. According to experts, by 2020 the proportion of elderly people in Europe will reach 25 percent. By mid-century this number will be one-third of the total population.

In Russia, the share of people over 60 years of the age is 18 percent - mainly due to the high mortality among men. However, scientists from Austria and the U.S., when calculating the dynamics of the aging population, promised nearly the same numbers to Russia as the European countries by mid-century. The trend is clear: over the past few years, the average life expectancy of Russians has increased by three years - from 66 to 69. In Moscow this number is even higher - nearly 74 years.  However, it would be correct to speak not about the mass aging of the population of the developed countries but a significant prolongation of life, and, most importantly, active life. Indeed, today cheerful 60 - and 70-year-old "old men" and "old woman" do not look unusual. They actively travel, engage business or their favorite activities, and are active in their personal lives. They also look much younger than their parents at this age.

94-year-old Yuri Lyubimov left Taganka Theater not to retire. Somehow, it seems that a suggestion "to retire" would be perceived as an insult to him as the famous director is still in demand and is invited to perform at the Bolshoi Theatre. Maya Plisetskaya was on stage in the most difficult ballet variations until she was 70.

Skaters Oleg Protopopov and Ludmila Belousova at their age of over 70 continue to please their fans by their performances in ice shows. Sophie Loren made a small "revolution" - at the age of 71 she starred half-naked for the cult calendar for Pirelli, famous for photographs of the most beautiful women in the world. It turned out that at the age of 70 one can look the way to make a calendar look good.

Dilma Rusef became the new president of Brazil at the age of 62. No one thought that she was too old for this position. Conversely, 56 percent of her compatriots who voted for her believe that the energetic and charming Dilmah is perfect for this role. If everything goes as planned, we can talk about her second term. It seems that in the next ten years Dilma is not going to retire. Paul McCartney who will turn 70 next year, re-opened another chapter in his family life - he recently married for the third time.

It turns out that the "mutants" have long been among us. But even 20-30 years ago they would have sat quietly at home and have not shown off to the public. The public was not ready for the fact that there is life after retirement, and a great life. We live in interesting times, when social stereotypes on what people over 60 should look like and act like are changing.

Indeed, a few decades ago it was simple and clear - at the age of 20-25 you had to get an education and start a family, at 30-45 - have a career, and then switch to grandchildren and prepare for the retirement. But if the active life is lengthened by 20-30 years who is interested in these limits? One can study until the age of 30-35. Many in the West tend to start a family at this age as well, if not later. In any case, women who give birth to their first child after age of 40 do not seem anything out of the ordinary. The argument - when the child graduates, I will be over 60 - is no longer scary. American actress Rachel Welch at her 70+ looks the way that makes many younger women envious. Of course, plastic surgery played a certain role, but it was not the only thing. There is quite a clear trend - "we're not going to get old."

Incidentally, marketers were one of the first to notice the new trend of mixing age groups. Suddenly it became clear that stores of youthful brands like Zara or Mango are frequently visited by not only daughters, but also their mothers. "Traditional marketing provides for the division of the audience on the criteria of gender, age and income.

Today, there are no hard rules. It became clear that there are new people and new psycho-consumer groups that require special treatment," says market researcher Nicholas Corot. The modern world is characterized by the union of the narrowly interested groups, where neither age nor sex nor income is critical. In this respect a 60-year-old manager will have much more in common with her 40-year counterpart than with peers from other social circles.

However, neither Western nor Russian society was ready for such a rapid increase in life expectancy. "When six years ago I was at the environmental conference in Italy, there was a comment made that a major problem for the country's economy was longevity. Of course, not the mere existence of such people, but the stress on the state pension system," said Vera Stepanenko, head of the Moscow City Duma on Ecology.

Indeed, an Italian lady over 90 who still has many years ahead of her receives a pension of 5,000 euros (while the average salary of a working young man is no more than two thousand), can be a serious problem for the government. No economy can simply survive if all pensioners live to be 90 years old. Yet, today in the developed European countries, the average life expectancy is 84-86. In France, there are a very large percentage of those who approached the 100-year milestone. What should they do? Cancel the retirement payments?

It is clear that no one will do this. However, the government will certainly have to think about the ways to use this suddenly appeared human potential. All of us who would eventually inevitably turn 60, and 70, would have to ponder what to do with our lives in these decades.  Especially, given that the contemporary times are not only breaking stereotypes, but also open many opportunities. For example, at a conference on philanthropy it was mentioned that many people who began to engage in this activity as a hobby, then changed their professions. If you have a long life ahead, why not try out different areas?