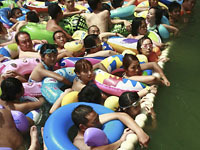 The whole world was shocked by the tragedy of a little girl from China. The two-year-old girl was run over by a van and then by a truck. The shocking video footage showed the drivers leaving from the site of the incident. Passers-by did not pay any attention to the bleeding child either. In China, rescuing a child will cost its savior big money - he or she will have to pay 50% of medical costs.

The graphic surveillance video of the incident in Foshan city, Guandong province, shows the girl run over by a van, which then drives off leaving her bleeding on a narrow street. More than a dozen people walk or drive past the critically injured girl, named Yueyue, without going to her aid before she is run over by a second truck, the Daily Mail wrote.

Eighteen people witnessed the horrific tragedy, but only one woman dragged the child away from the road. The girl's mother was not watching the child - she was busy on a market.

The girl was delivered to the hospital, where she elapsed into a coma and then died. The two drivers, who killed the child, were arrested only after the horrific video footage was posted on the Internet.

Chinese bloggers called this incident "the shame of the Chinese people." However, there is more hypocrisy than shame in these words. The incident looks horrific and blood-chilling for European people, who live in more or less well-to-do countries. Killing a child in China is a common event.

In China, they break the spines of newborns, they bury them alive, strangle and poison them, or just starve them to death. All of that mostly happens to girls, because the birth of a baby girl in China is economically unprofitable.

Girls have to have dowries, so a family has to work hard for it for years. The pension system in China is meant for a narrow circle of state clerks. Elderly Chinese parents are supported by their sons. Hideous crimes committed against little helpless kids happen all across China, not just in remote rural areas. Beijing garbagemen often find dead bodies of little children in stinky wastes. Sometimes they are still alive...

There are 118 boys per 100 registered girls in China, whereas the biological norm is 104-106 boys and 100 girls. To put it in a nutshell, they destroy one-seventh of Chinese girls. The girls are killed by their own parents. "One family - one child" policy gives an incentive to it as well.

This problem exists among Asian immigrants in Europe. The Council of Europe even discussed an opportunity to ban the process of gender identification for children. This process became the main reason for so-called selective abortions.

Therefore, the people, who simply passed the little girl by and paid no attention to the dying child, acted "normally" for China. Most likely, they simply thought that the girl's parents decided to kill the girl.

The main problem of many Asian countries is overpopulation. The value of human life falls lower than the lives of certain animal species. Moreover, if a person volunteers to save someone, the savior will have to cover 50 percent of medical expenses of the saved individual.

The driver of the van said that the girl's death cost him $1,500. However, if she had survived, he would have paid a tenfold of that amount.