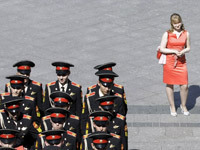 Traditionally, many young men in Russia try to do their best to dodge the army service. In St. Petersburg, a man tried to take a legal action to prove that conscription is nothing but a form of sexual discrimination of men.

The idea occurred to the man after he was qualified healthy for military service. The man decided to prove that mandatory army service was discriminating. He asked to be stricken off the register because the obligation for men to have military registration was a form of sexual discrimination.

The conscript referred to the Russian Constitution and international acts that guarantee the equality of rights and liberties for human beings and citizens regardless of their sex. Another norm of the constitution that touches upon military service does not say that the army service exists only for men.

As a result, a court of St. Petersburg said that the obligation of male citizens of the Russian Federation to receive military registration is stipulated by the federal law "About military duty and army service." Exceptions are made for certain categories of men (who permanently reside abroad, etc.) and for women who do not have military speciality.

The man disagreed with the court decision. He went to the Constitutional Court of Russia, but the judges did not find any reason for discrimination either.

It is worthy of note that the number of Russian women, who want to serve in the army, has been growing in the country steadily. The number of such women has increased tens and even hundreds of times in several regions of the country.

Experts say that the army-loving women have several goals to pursue. They want to find a job, go to college after service without exams, and, finally, find a husband in the army. Needless to say that women indeed have an amazing choice at this point.

The military enlistment office of the city of Nizhneksmsk had ten vacancies open for the position of signal operator. The response to the vacancies was very impressive. As many as 300 women came to the office in a hope to get the job.

According to experts' estimates, the number of women willing to serve in the army has increased by seven or ten percent this year. Military service guarantees them a stable financial income, which may often be higher than average salaries in their native towns.

It can be hard for many women to find a good job. Most of them can become either common workers or sales assistants, and they would have to work full time for 3,000-4,000 rubles ($100-130) a month. They can receive a lot more if they serve in the army. However, there are no career options for women in the Russian army.