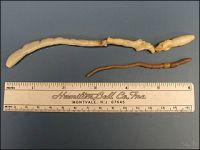 Earthworms help both with the wetting of the soil, and retention of water in the dry season. The animal has the mouth and anus on opposite cavities...

They have proven to be a survivor of nature. They have inhabited the planet for 300 million years according to researchers, and now it was discovered that they prevent floods and droughts, which are reflections of global warming.

In the United Kingdom, a four year survey was conducted in Leicestershire. This was supported by Heritage Lottery Funding Group, which noted the important role of earthworms in soil. They burrow in the soil, recycling nutrients, and are important as food for birds of various species.

The annelid is able to eat a third of their weight in land in one day. When digging tunnels, they absorb water, turning the soil into a sponge in a period of flooding. During droughts, they help to slow the loss of soil water. They can live up to 10 years and can walk up to 8 meters per hour on the ground.

The reproductive season of the earthworm is defined more by meteorological conditions than which month of the year it is. When the environment and temperature are favorable, which typically occurs in hot and humid periods, and generally at night, worms look for a partner to fertilize. Each worm, under ideal conditions, can produce 100 to 140 offspring in a year.