No one is afraid of naked male sleepwalkers in British hotels 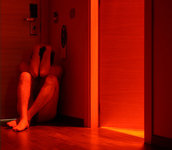 Meeting a naked visitor in the lobby bar of a British hotel at night is nothing special. A research prepared by a well-known hotel chain showed that the number of sleepwalkers in 2011 has had a tenfold increase in comparison with the previous year. The administration of the company even published a special manual that teaches personnel how to communicate with sleepwalkers. The most surprising thing about it all is that the majority of somnambulists walk around hotels naked.

Ninety-five percent of sleepwalkers are males, the research from Travelodge hotels said. This is probably because male clients usually outnumber female clients. However, specialists say that men are more prone to sleepwalking. This condition may develop because of stresses, as well as overconsumption of cheese, coffee and alcohol.

Monica Andersen, a professor at the University of Sao Paolo, said at the international conference devoted to sleep-related problems that many people suffer from chronic sleeplessness nowadays. This problem is widely spread among men because men, as a rule, work more than women do.

As for hotel personnel, naked people may shock only the beginners. Hotel managers organize special training sessions for personnel to prepare them for all forms of bizarre communication. There is a special rule, for example, for receptionists to always keep a bath towel around. The towel is kept for encounters with naked sleepwalkers.

Somnambulists usually approach reception desks and ask innocent questions like "Where is the bathroom?" or "Do you have some fresh papers?"

Receptionists have to take a bath towel to cover the nudity of a client and try to take him back to his room.

Psychologists say that 20 percent of stressed out men run the risk of developing sexomnia. This is a form of somnambulism, in which a man has sex while asleep and remembers nothing after waking up. There were incidents when such sleepwalkers, or sleep sex makers, better to say, harmed other people.

Psychologists say that modern people try to realize their fantasies, including sexual, while sleeping, staying under the pressure of constant stress. Civilization turns us into sleepwalking monsters.