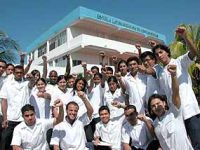 Cuba will close this year with almost 22,000 doctors from 66 countries trained in study programs similar to those used in Caribbean nations that focus on preventive medicine, indicated today's press.

Those included in that figure will complete their study in December with the first graduation of doctors in Venezuela with Cuban teachers and methods, the daily Granma said after noting the graduation so far of about 13,600 doctors in other countries.

Soon the initiative of the leader of the Cuban Revolution, Fidel Castro, will expand to the rest of Latin America, Asia, Africa and even to poor communities in the United States.

According to the source, Cuba has 21,000 students enrolled in medical universities from 113 nations, more than 1,700 of them attend in their own countries in the last years of their study.