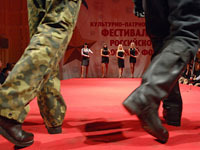 The autumn military conscription started in Russia on October 1. As many as 140,000 young men will be called up for military service this year. This is nearly 100,000 men fewer than was drafted in spring. Officials with Russia's Defense Ministry say that the reduction of the number of conscripts is connected with the growing number of contract servicemen. At the same time, representatives of Russia's General Staff said that over 200,000 people dodge army service in the country.

The conscripts of the new draft will experience the results of the reform of the Russian Armed Forces. Special attention in the reform will be paid to the conscripts who already have children. The young fathers will be sent for military service in the regions of their residence.

The reform does not cancel the previous outfits for the soldiers - the "glamorous uniforms" by well-known fashion designer Valentin Yudashkin. Specialists say that Yudashkin's uniforms can be good only in southern territories of the country. It took the designer a lot of time to create the uniforms. They were subsequently tested at military units and military schools of ground, airborne and interior troops.

The Victory Parade on Moscow's Red Square this year showed that the new uniforms differed from the old ones considerably. There are no patch pockets on shirts and coats. The crowns on forage caps became two centimeters shorter, which made them look like the caps from the 1930s. The general's forage cap became a copy of Marshall Zhukov's headwear. The boots became sharp-nosed.

Hundreds of soldiers came down with flu in many military units because of the new uniforms. In the town of Yugra, for example, hundreds military men were hospitalized with pneumonia and kidney failure.

The military jacket of the new type has a very short collar, which does not protect the neck from the wind. High lace-up boots are comfortable, but the feet get cold and sweaty in them in winter time.

The fabric used in the production of the new uniforms is not so strong as the materials used for the uniform of the previous generation. Buttons fall off in a couple of weeks, colors bleed...Many soldiers say that the new clothes are very easy to break.

The price tag is also important. The new uniforms are two or even three times more expensive than the old outfits. Defense officials explain this with the use of state-of-the-art technologies, modern materials and progressive solutions used in production.

It is worthy of note that Russia's Interior Ministry has decided to refuse from the services of the well-known fashion designer. Mikhail Sukhodolsky, First Deputy Interior Minister, said in January 2010 that Russian policemen would be dressed in Yudashkin's uniforms. Each new set of clothes would cost 34,000 rubles, which is twice as expensive as now.

The ministry rejected the information a year later. It became known that the new uniform for Russian police officers would look like post-war uniforms. The officers will have reflective "Police" signs on the chest and on the back. The radio sets and handcuffs pockets will also become more comfortable.

The uniform of any organization represents the face of this organization. Brands are not important here at all. Common sense is what matters.