Russian woman escapes from her US sadistic husband 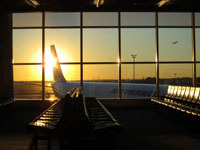 Marianne Grin of Russia secretly took out her four children from Italy to Russia, saving them from their sadistic father. The Italian authorities not only failed to protect the children from the constant abuse, but on the contrary, gave full custody to their father. The situation is complicated by the fact that he is an American lawyer working in a large international company. Today Marianne seriously fears for her family. Employees of the U.S. Consulate in St. Petersburg have already attempted an intrusion into her apartment.

Marianne's parents moved to the U.S. when she was 15 years old. The girl successfully graduated from high school and enrolled at the prestigious Harvard University, where she earned his doctorate in law. She met her husband while working in a law office in Manhattan. Soon after the wedding, he invited her to move to Italy, where he has previously worked.

"I did not want to leave, because my career was progressing well. But my husband was very persistent. The only advantage of the move was the proximity of Italy to Russia, with which I never broke ties. All my children have Russian citizenship. Almost every summer we went with them to St. Petersburg, where I still have close family," says Marianne.

Marianne had hoped that after a couple of years they would return to the States. As it turned out, her husband settled in Italy for a long time. As a lawyer, he represented the interests of large U.S. companies. "I was surprised that my husband preferred to stay in a small Italian town. Typically, the company's employees with branches nearly all over the world often move because of career considerations. He did not seem interested," says Marianne.

A few years later it became clear that their family life was failing. The husband frequently disappeared from the house without warning. Soon he moved to another apartment. According to Marianne, she was fine with this situation: "I understood that our feelings have cooled down long time ago. He wanted freedom - he got it. I was busy raising children." But as it turned out, her husband wanted not just freedom - he also had to protect himself from possible financial claims of the wife in the future.

"He once told me that he has filed an action against me," says Marianne. Interestingly, it was not about a divorce. According to the statement, the husband accused the wife of "psychological abuse" towards their children. "Violence" was manifested in the fact that children were forced to learn to play violin and speak foreign languages. Outraged by this "cultural tortures," the father insisted that the court limited the mother's rights for the children. According to Marianne, this unusual move was made by her husband so he would not have to pay child support in case of a divorce.

Since then, the life of this successful woman has changed drastically. She was assigned at least five social workers, one of which practically settled at her home. All of them had to watch how well the mother treated the children to determine whether the children's psyche was threatened by her behavior.

However, despite her husband's connection to the local courts, he was not successful at quickly depriving the mother of her parental rights. "And then his evil, vindictive nature manifested itself in all its glory. He began to abuse me and the children," says Marianne. One day her husband hit her against the wall with such force that the woman partially lost sight in one of her eyes. On another occasion, he broke his eldest son's arm and tried to strangle him. In response to the children's stories about physical abuse, a police spokesman advised the social authorities to send the children to a boarding school.

Naturally, once in such an unexpected situation, the woman tried to defend herself and sued her husband for causing harm to the health of children. The prosecutor has opened two criminal cases - traumatic brain injury in two children and malicious failure to pay child support. Yet, the local social authorities nevertheless decided to give custody to the father.

This was said to be a temporarily measure - for the duration of the divorce of Marianne and her husband. Yet, in Italy, such cases can drag on for 5 or 7 years. All this time the interim decision of the judge cannot be appealed in higher courts. As a result the "temporary" solution could well become permanent for quite a long period of time. This situation continued in the family of Marianne Grin for three years.  Several times the woman tried to seek help from the local U.S. consulate, asking them to protect her from her abusive husband, Together with her eldest son, whose arm was broken by his father, she came to a meeting with the consul where the boy described in detail the behavior of his father. In response, they were told that the consulate did not have the necessary authority to influence the situation.

The result in the Russian Consulate was more positive - the Russian Foreign Ministry sent an official request regarding this case to their colleagues in Italy. Yet, as expected, the response received indicated that the local judiciary was independent and does not allow interference in its affairs.

The relationships between the father and children during this time have deteriorated and the children complained of daily beatings. The eldest son, now 14 years old, stated categorically that he was not going to live with his father. In response, the latter asked the local authorities to send his son to a psychiatric hospital because of his "strange" decision.
"Under the American law there is no statute of limitations for crimes committed against children. A few years later as an adult the son may very well go to the United States and file a claim  in a court against the father. The least the father will get will be the loss of his law license, because the laws on violence against children in America are very strict," says Marianne. However, if he timely sends the boy to a psychiatric hospital, he can claim his insanity and thereby protect himself.

"In late August I was told in court that if my son would not voluntarily go live with his father, he will be taken into a closed institution, and I will be completely deprived of my parental rights. I could not let this happen because I was not sure of the safety of my child," says Marianne. Then the woman decided to take a desperate step and secretly took all four children to Russia - just one day before the execution of the threat.

However, it soon became clear that the husband will try to get to her there as well. Last Friday Marianne's apartment in St. Petersburg was visited by the employees of the U.S. Consulate. They practically forced their entry and conducted an illegal search of the apartment. Of course, Marianne and children were not there as the apartment has been rented out for a long time. The frightened residents were urged to provide the address of the woman. Fortunately, they simply did not know.

The official representative of Marianne Grin sent a letter to U.S. Ambassador to Russia John Baeyrli, where he requested to provide copies of the documents of the staff who illegally invaded the apartment of Mrs. Grin for prosecution. The letter emphasized that within the last three years the officials of the American diplomatic service in Italy showed no interest in the fate of children and their mother who repeatedly asked them for help. In addition, the consulate employees have all the contacts of Marianne, and if necessary, they could have contacted her.

At the moment, Marianne Grin intends to appeal to Russian authorities about abuse against her and her children, as well as the threats to life and health. As pointed out by Marianne, her conflict with her husband is not personal - she is moved by quite understandable and natural desire to protect her children: "We have no economic disputes. My husband already took everything - from the apartment to the car and savings. Child support is not paid, since in Italy it is not punishable. I do not have any financial requests, as all the property is registered in the name of other people."