USA delivers Nazi criminal to Germany, albeit in 60 years 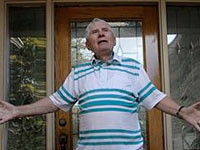 Ninety-year-old Ivan Kalimon (John Kalymon) was number seven on the list of the most wanted (but not dangerous, as sometimes erroneously reported by some publications) Nazi war criminals. He will soon appear before a Munich court. The trial of another Ukrainian-American, Ivan (John) Demjanuk was a good example. The court is going to be just and swift.

Born in 1921, a native of Ukraine Ivan Kalimon since 1949 has been residing in the U.S. in the state of Michigan. According to the Simon Wiesenthal Center in Jerusalem that compiles the list of the most wanted Nazi war criminals, he was involved in murders of thousands of Jews in Lvov during World War II.

According to Tagesspiegle newspaper, 18-year-old Ivan moved to Vienna, where he briefly helped in the agricultural operations at a farm. Later he worked for two years in Hanover, and after that his traces were lost until he reappeared in Lvov.

From 1941 to 1944 Ivan Kalimon served as a volunteer, (Freiwilliger) in the Ukrainian Auxiliary Police, whose members were actively engaged in the persecution and extermination of Jews in Lvov that has later become Lemberg. During World War II, the Ukrainian policeman was involved in the sweeps held in a Lvov ghetto, deportation of Jews and mass executions. At the very least, there is one documented murder committed by Kalimon.

After each "special operation" carried out, the Ukrainian Auxiliary Police staff reported to their Nazi masters, particularly on the expenditure of ammunition. The Germans with their usual thoroughness had detailed documentation, which after the defeat of the Reich got in the hands of the Allies. In August of 1942, policeman Kalimon reported to his superiors about his participation in an operation against the Jews where he shot one person dead and wounded another.

The handwritten document reads: "I, (...) Ivan Kalimon of the 5th Ukrainian police commissariat on 14/08/1942, at 7pm during the operation against the Jews used a service weapon, 4 rounds. I wounded one man and killed another." This document alone puts Kalimon at a greater disadvantage compared to the position of Demjanuk. His trial may be quicker than is the case with his Ukrainian namesake who was accused of destroying at least 29 thousand people.

At the time this document was obtained from the Office of Special Investigation (OSI) in Washington DC (a special unit for investigation and punishment of Nazi war criminals, established in 1979 under the Department of Justice). Now, according to the criminal police in Bavaria, they only have to prove that the document was actually written by Kalimon. Other documents that contain Kalimon's signatures made during the war were prepared to enable the analysis.

At the end of World War II he was in Czechoslovakia, and later moved to the Rhineland. He has German citizenship. As Demjanuk, Kalimon first appeared in the American camp for "Displaced Persons", located near Munich, and later immigrated to the United States.

According to the testimony of Ivan Kalimon, he participated in rallies held in the camp "Belzec" in Poland. The Nazi concentration camp and death camp "Belzec" (in Polish Bełżec, in German, Belzec) was one of three extermination camps, along with the Sobibor and Treblinka, where the so-called "Operation Reinhardt" was carried out (Aktion "Reinhardt" or Einsatz "Reinhardt"). This code name was given to the state program of the Third Reich on the systematic extermination of Jews and Gypsies in the General Government (in Nazi-occupied part of Poland and western Ukraine). As a result of this action over two million Jews and 50 thousand Gypsies were killed.

The main charge against Kalimon, like in the case with Demjanuk, is the murder of Jews in death camps. However, in the case of Kalimon the detectives acted differently than with Demjanuk. The need for collation of lists of names of the deported with the names of forcibly slaughtered was eliminated because this method would increase the incredible number of casualties. In "Belzec" alone over 600,000 prisoners were killed. Later in Warsaw Kalimon guarded a group of prisoners, Jewish workers.

In 2007, the U.S. government legally deprived Kalimon of American citizenship, and in January of this year, as reported on the website of German newspaper Frankfurter Rundschau, he was ordered to leave the country. The attempts to deport the offender immediately, for example, to Germany, did not work out, because this issue should be first settled with the Ministry of Foreign Affairs. Later it became clear that the case will be transferred to the Munich prosecutor's office, where the central office of the search for National Socialist criminals, in the end, submitted all necessary documents.

Kalimon confessed to the crime immediately. In October of 2009 his trial commenced in the U.S. The trial of a Nazi criminal drew international attention and attracted media from around the world. A film crew from Ukraine came to the U.S. Kalimon initially was cautious towards his former compatriots, but then gave them an interview.

Former executioner described himself in the following way: "I do not know a more honest man than I am." Speaking about his service in the police, he said that he was the youngest, held the lowest position and performed the simplest operations. Kalimon said that he worked for the Nazis as a driver. He said he never killed anyone. The report of August of 1942 that the accusation is based on is fake and was made by his former Nazi superiors.

Answering the question "Why did you not join the Red Army?" Kalimon replied: "I did not want to. I never would have joined, because I know one thing: I am a Ukrainian and Ukraine must be independent. Why did I not join underground work? I did not want to because I was scared. With my chronic illnesses I could not go underground. What would I do there?" Kalimon is a chronic asthmatic. Later, in the U.S., he was diagnosed with cancer.

Living in the U.S., he had the reputation of a pious man among the neighbors. This was confirmed by Lubov Kalimon, his wife: "Ivan was always very religious, went to church. He would never kill a person."

Press Service of the U.S. Department of Justice said that for the criminals that took park in the Holocaust it was time to understand that the U.S. was not going to be their "safe harbor".

While the decision of the American Themis is very welcomed as a visual proof of the principle "there is no statute of limitations for the Nazi crimes," the fact that it took the U.S. authorities six and a half decades to do such proceedings, even excluding the legal and diplomatic delays, is quite sad. The extradition of Nazi henchmen proves once again that the traitors are never welcome. They will be all punished, even if at a very old age.