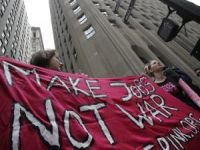 Street protests coming to the U.S.

There wasn't a crowd of Egyptian proportions, but in the American context, it is extremely significant and it promises not to leave. An occupation began on Wall Street. A few thousand people took to the streets on Saturday in the southern island of Manhattan, the heart of the U.S. financial capital. They vow to remain there, and many are betting that the concentration will expand this Sunday.

Completely ignored by the televised and printed media, the movement was articulated over the Internet. When the demonstration was called by the movement to occupy Wall Street, in which the Anonymous is made present, the event includes a series of demands that have not long been seen in the American public sphere:

1. That the protests remain active in the cities. To grow, get organized, become aware. In cities where there are no protests, that they become organized and break the system.

2. We call upon the workers not only to strike, but to collectively take it to their workplaces and organize democratically. We call on teachers and students to get their act together and teach democracy, not just teachers to students, but students to teachers. Occupy the classrooms and free our heads together.

3. We call on the unemployed to come forward as volunteers, to learn, to teach, to use the skills they have to be supported as part of the community popular revolts.

4. We call for an organization of popular assemblies in every city, every square, every town hall.

5. We call for the occupation and use of abandoned buildings, abandoned land, of all properties occupied and abandoned by speculators, for the people and for each group that organizes the people.

Showing that U.S. democracy is no longer the same, the police cordoned off the blocks from Wall Street lying between Broadway and William streets. There were no major disturbances on Saturday, but police are clearly confused with the decentralized nature of the demonstration. Several present reported that the demand was insistent "We want to talk to the leader," before which was invariably received the answer "There is no leader."

There is a total media blackout on the movement. Fox News, CNN and MSNBC, the three major news channels on cable, have not reported anything. The four major broadcast TV stations, ABC, CBS, FOX and NBC have not reported either.

In the technology section of its site, CNN has a bizarre matter that said the movement was "trying to emulate Iran." The New York Times did not give a line in the newspaper itself, but only a little note on the blog.

On Saturday night, the popular assembly decided to spend the night there and, on Sunday, the arrival of more people is expected. Many protesters say they will stay on Wall Street for weeks or months, in a revolt to scream against the financial capital. On Monday, of course, the police will no longer be able to close Wall Street, and that is what the movement is betting on.

There are some sources to accompany this auspicious event. The tag on Twitter is #OccupyWallStreet. On Sunday, the live broadcast should resume on the protest site of the Global Revolution. There should also be streaming all day at Adbusters, which is part of the organization. The Anonymous are posting videos. A small television station in Washington, RT Television, is covering the event. There is also news and videos on Scoop it.

Given the revolt against the accumulation of financial capital in the U.S., the movement has much potential to grow. It may be that it will turn out to be something very interesting.