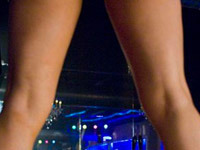 "Our goal is nothing less than to survive the apocalypse to come in comfort and luxury, whether that catastrophe takes the form of fireballs flung earthward by an all-seeing deity, extended torrential rainfall, Biblical rapture, an earthquake-driven mega-tsunami, radioactive flesh-eating zombies, or some combination of the above," said Pink Visual spokesman Quentin Boyer.

According to Boyer, the website of the studio will continue to work from the bunker even if the servers on the surface of the planet are destroyed.

Mr. Boyer did not unveil the whereabouts of the bunker for security reasons.

The studio is currently picking the lucky ones - the people who will be able to celebrate the doomsday with Pink Vision. Active visitors of the studio's website will most likely be among the chosen. The bunker will be able to accommodate and entertain from 1,200 to 1,500 people.

As for the number of possible survivors of the Apocalypse in 2012, it appears that there will be a great deal of them. Many buy underground shelters in a hope to stay alive after 2012. The demand on bomb shelters in the United States began to grow speedily after the mammoth earthquake and tsunami in Japan.

The cost of such shelters varies from $200,000 to $20 million. The price depends on modifications, but any bunker can withstand explosions of up to 50 megatons. Survivors will be able to live in such bunkers for several weeks.

Some companies quickly realized that they could make very good profits from selling luxury bunkers. They are certain that wealthy individuals must save their lives from man-made disasters in comfortable and even luxurious conditions.

Russian entrepreneurs try to keep up with their American colleagues. The construction of Russia's first-ever private bomb shelter is going to be launched in the Altai region.

Danila Andreev, the director of the company that deals with the construction of VIP shelters, said that the shelter will look like a small settlement. The company will build small townhouses in a picturesque location in the mountains of Altai. The settlement will look like a ski resort. However, there will be special bunkers built underneath every house in the settlement. All of the bunkers will be interconnected with each other.

"It will be possible to go there for holidays during the times of peace. The visitors will be able to take a rest there, to do some rafting and biking. It will also be possible to hide there in case of emergency," Andreev said.

"It will be a special club, there will be no come-and-go people there. The project is not going to be commercial for us. The members of the project will get everything at prime cost," the businessman said.