Humans have one amazing emotion that extends youth, has a positive effect on the mood and even, as recently discovered, helps to endure pain. This emotion is laughter. Other primates also can laugh, but only people can laugh heartily. Some scientists believe that in the process of evolution laughter came before speech. 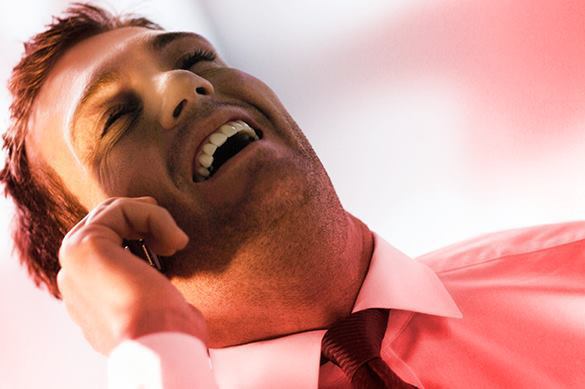 Neurophysiological centers responsible for laughter are located in the "ancient" parts of the cerebral cortex that are present in many animals. This leads scientists to believe that the ability to laugh is not at all unique to humans - animals, in their opinion, have similar ways of expressing joy. Approximately ten years ago in the journal "Science" Professor Jake Panksepp published an article where he argued that many of the little animals, too, know how to laugh. According to the professor, they laugh a bit different than humans do. Monkeys and dogs make puffing sounds, while rats squeak, and at very high pitch - up to a frequency of 50 kilohertz. Sense of humor in rats was previously confirmed by researchers from Washington State University, in USA.

There are numerous theories about the origin and functions of laughter. Laughter does not need to be learned as it is an innate reaction, like blushing or sneezing. The simple fact is that the ability to laugh is observed in those animals that live in groups. There is a theory that laughter is an emotional component of the herd instinct. Watching someone in an absurd situation, contrary to the traditional rules, makes us laugh. For those who made the mistake laughter in response is a good chance not to lose status in the group. If, however, the ridiculed get offended, the offense creates a learning experience and makes them not to get into similar situations in the future, which is ultimately also beneficial.

Another theory suggests that laughter, both in humans and animals, is a way of communicating with large groups of relatives. Indeed, it feels better to laugh in a group than alone. Loud laughter can at once attract a large number of tribesmen, it draws attention to some pleasant or amusing information and helps to unite the group. Laughter can also be a protective reaction of the body that helps to alleviate stress. In a situation of a prolonged stress (for example, during exams or crisis at work), we try to joke and laugh more often. However, laughter in such cases is tense, this is why it is called "nervous laughter." Yet, according to experts, it is much better than not releasing the tension.

Recently, scientists have discovered another promising fact: sense of humor helps to endure pain. Professor Robin Dunbar of the University of Oxford and his colleagues asked groups of volunteers to watch a movie, after which they experimentally measured their pain sensitivity. One group watched a comic video for 15 minutes, while the other was shown a video of a golf competition. After that, an ice pack was applied to each volunteer's hand. Very cold objects during a prolonged contact with skin cause no danger, but certain tangible pain. Volunteers who watched the funny video could endure the touch of ice to the hand longer.

The experimenters could even figure out what kind of humor helps people to endure pain and cold. Intelligent jokes, despite the satisfaction they may bring, did not improve the pain threshold. However, clowning, situational comedy and eccentric humor proved to have an analgesic effect. That kind of humor, according to scientists, causes a sharp increase of endorphins in blood levels - the proteins that are produced in brain cells and cause the sensation of pleasure. The same substances are produced by other bright and pleasant emotions, such as falling in love. Professor Dunbar has even proposed a theory that laughter helped our prehistoric ancestors not only to cope with the hardships of cave life, but also to unite and experience warm feelings towards their relatives.

The scientist is going to continue the study of humor and laughter. According to him, this is an enigmatic and very important part of our lives: "Laughter is a very strange thing. When we talk to someone, we spend much time trying to joke and laugh at ourselves and each other."