Moscow mosque demolished ten years after 9/11 attacks in US 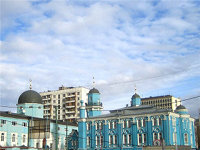 The historical building of the Moscow Cathedral Mosque was demolished in Moscow, on September 11.  The building was leveled during reconstruction works.

"The workers bulldozed the building of the historical mosque to the basement," Albir Krganov, the first deputy chairman of the Central Spiritual Administration of the Muslims of Russia told Interfax-Religion news agency.

The official was informed about the event by the faithful, who eyewitnesses the demolition of the building. Krganov was very surprised as to why the mosque was demolished on Sunday, September 11.

"Ten years after the terrorist acts in the United States, a tragedy has occurred in Moscow too," the mufti said.

Ravil Gainutdin, the head of the Council of Muftis of Russia - the organization that was in charge of the repairs of the mosque, said that the Moscow Heritage Committee stated that the Cathedral Mosque in Moscow did not represent historical value. The committee decided to rebuild the old building.

On June 30, 2008, the Moscow Legacy Committee decided to classify the mosque as an object of cultural heritage. In November 2009, several members of the committee put forward a suggestion to level the building of the old mosque.

Russian religious organizations, such as the Central Spiritual Administration of the Muslims of Russia and the Russian Association of Islamic Content harshly criticized the plans to demolish the historical building.

The mosque in Vypolzovy Pereulok was built in 1904 by Salikh Erzin, a well-known Tatar philanthropist. The building was supposed to be demolished prior to the Olympic Games of 1980, but religious activists and the ambassadors of Arab states rescued the temple. The reconstruction of the mosque was launched in 2005.