Uncle Sam is not alone 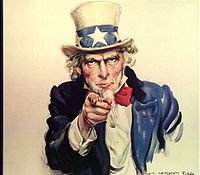 Everyone knows the personified image of the United States very well. This is Uncle Sam - a bearded man wearing a top hat with stars and stripes on it. Where does this image come from? For the first time, it appeared during the British-American war in 1812. The most popular version is the following. The meat supplier for the Troy army base in New York was a local vendor named Samuel Wilson.

Barrels with the goods were marked as U.S. designating the country of origin - the United States, not a certain individual. Soldiers made up their own key to the abbreviation - Uncle Sam, which coincided with the name of the supplier.

Uncle Sam as a picture appeared a lot later, in nearly 40 years. On March 13, 1852, a New York newspaper published the work created by Frank Henry Temple Bellew depicting the legendary uncle. James Montgomery Flagg created the most popular picture of Uncle Sam during WWI. The elderly gentleman with the same goatee and the top hat was saying: "I want you for U.S. Army."

On September 15, the US Congress passed a special resolution, which proclaimed Sam Wilson the official prototype of Uncle Sam. A monument to Wilson was erected in his hometown of Arlington. Uncle Sam became a national symbol of America, whereas his name became a synonym to the US government.

Other countries have their unofficial names too. The origin of those names is usually connected with geographical peculiarities of countries', their national traditions or history. Perhaps the most famous of such names is the Land of the Rising Sun, which designates Japan. The name of this country in Japanese is written with two hieroglyphs - "sun'" and "root," or "beginning." Therefore, "Japan" literally translates as "sunrise."

Japan's neighbor, Korea, also has a poetic name. Korea is known as the country of morning freshness. The origin of this name is also connected with its hieroglyphic writing.  In ancient times, the country that was situated on the Korean peninsula had no writing system. The country's wise neighbor, China, tried to give the "nameless" country a name in written form, with the help of their hieroglyphs. As a result, the name of the country had to be pronounced as "cho son."

Surprisingly, those two hieroglyphs translated from the Chinese as "morning freshness." This name became known in Europe after explorer Marco Polo called Korea "the land of morning freshness" in his records.

Not many people probably know about the existence of the Land of the Midnight Sun. It sounds mysterious, doesn't it? This beautiful name belongs to one of the Scandinavian countries - Norway. A third of the country's territory lies beyond the Polar circle, where the sun does not set from May till July every year. Norway is also known as the Kingdom of fiords because of the unique structure of the coastline.

Finland, another Scandinavian country, is known as the Land of a Thousand Lakes. As a matter of fact, the number of lakes in Finland is a lot larger than just a thousand. There are 187,888 lakes and 179,584 islands in the country. Finland can also be referred to as the Land of Swamps. The name of the country in the Finnish language sounds like Suomi. The root of this word  - "suo" - means "swamp."

Australia is known as the "Green Continent" and the "Land Down Under." Everything is different on this continent indeed. Winter months in Australia are June, July and August, whereas December, January and February are summer months. The climate in the north of Australia is warmer than in the south. Australia is not unique at this point, really. Such peculiarities are typical of the entire southern hemisphere including such countries as Brazil, Zimbabwe and all other southern nations.

There is another country in the world that can compete with Australia for the title of the green nation. It goes about Ireland, aka the Emerald Island. The country was called so because of abundant vegetation that stays green all the year round owing to frequent rains. Moreover, the island is rich with all shades of green because the mild climate of Ireland is good both for northern and thermophilic southern vegetation. Maple trees, fur trees and hornbeams grow in Ireland very well together with palm trees, lemon and laurel trees.

The lonely island of Tristan da Cunha is situated in the south of the Atlantic Ocean. This is not actually an island, but an archipelago lost in endless water space. The nearest land to the archipelago is Saint Helena Island, although this land is 2,161 kilometers far. The islands of this group are the home to 270 people. They are practically isolated from the rest of the world. The island is a part of the British Empire. Its capital is known as Edinburgh of the Seven Seas.