Violence against women: How men can say NO! 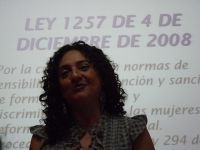 The United Nations Organization's UN Women has launched the UNiTE programme - UniTE to end violence against women, proposing different projects to raise awareness and counter this scourge which has reached shocking proportions in all societies. The latest initiative is the Global T-shirt Design competition.

Are you a young man aged between eighteen and twenty-five years of age? Do you want to help in the campaign to end violence against women? Then you can. The Global T-shirt Design competition (1) asks young men in this age group to:

* Think big and positive about the concepts of equality, diversity, and respect

UN Secretary-General Ban Ki-Moon states: "I call on all men and boys everywhere to join us. Violence against women and girls will not be eradicated until all of us - men and boys - refuse to tolerate it".

The winners will travel to New York, USA, to participate in the UN official observance of the International Day for the Elimination of Violence against Women, on 22 November at the UN Headquarters.

The UN Women site states: "United Nations Secretary-General Ban Ki-moon's UNiTE to End Violence against Women campaign aims to prevent and eliminate violence against women and girls in all parts of the world.

UNiTE brings together a host of UN agencies and offices to galvanize action across the UN system to prevent and punish violence against women.

Through UNiTE, the UN is joining forces with individuals, civil society and governments to put an end to violence against women in all its forms".