The amazing phenomenon of Ninel Kulagina 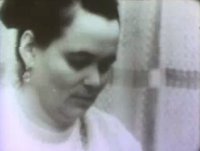 Many Russians may remember a black and white documentary of the years of perestroika in which a woman moved small objects sitting before her on a table and rotated direction of the magnetic devices. Ninel Kulagina is still considered one of the most mysterious phenomena in the field of ESP.

Ninel Kulagina was born on July 30, 1921 in Leningrad. In April of 1942, a young girl volunteered for the army. She was wounded and underwent several surgeries. She was awarded the Order of "World War I level," and many medals.

Her "supernatural" ability manifested in early adolescence. During dinner, she was too lazy to reach out for bread and the pieces "crawled" to her plate. Then she learned to stop and restart the pendulum clock at a distance. Her family soon ceased to be surprised that she was able to move various objects "with her eyes." The heaviest object she could move was a pitcher of water.

However, Ninel did not pay much attention to her abilities for a long time. Already in the elderly age, lying in a hospital after a heart attack, Kulagina took up knitting out of boredom. One of the nurses was surprised to notice that the patient chose balls of wool from a basket to the touch, without seeing color. She just "felt" colors.

Someone persuaded her to showcase her talents to her doctors. Soon Kulagina met with the famous Leningrad professor Vasilyev, who began conducting experiments with her in his laboratory.

It turned out that Ninel could read with "the back of her head," guess thoughts, move small objects with her eyes, affect the operation of technical equipment and even change the chemical properties of water. The effect could be felt at the distance of up to 2 meters.

For several years, Kulagina participated in a series of experiments in telekinesis conducted by the staff of Leningrad Institute of Precision Mechanics and Optics. During the experiments, she extinguished laser beams, moved objects and burnt holes in them with her eyes. Not to mention the "trivia" such as the irradiated film and the rotation of a magnet compass hand at a distance. The equipment used during the tests recorded magnetic radiation coming from her hands.

In the book "Formula of Love" V. Zakharchenko describes one of these experiments:

"A few small items were placed under the glass of the aquarium set upside down: a box of matches, a brass pen cap, a plastic ball for table tennis. Stretching out her hands over the glass, Ninel stared closely at the subjects under the aquarium.

"Do not waste your film, do not rush to take pictures," she said to the guy with a camera. "I'll tell you when to start".

Indeed, a few minutes later the objects were moving on the table. Then, after moving for approximately ten inches, they moved back. Ninel took the ball from under the glass, lifted her hands and the ball hung between them. During long and involved experiments Kulagina felt worse. She was tired, had back aches and headaches and tasted metal in her mouth.

The experiments were frequently broadcast on TV, described in newspapers and magazines. Click here to see the video of Ninel Kulagina

Once a magazine accused Kulagina of fraud, and she sued them. The scientists she worked with witnessed in the court and she won the case.

Kulagina also possessed the gift of a healer. In 1977, she participated in the research conducted by the Institute of Chemical Physics with the Academy of Sciences. In the first series of the experiment ten mice were inoculated with subcutaneous hematoma. Five of them were placed into a glass vessel, and within a few seconds Kulagina tried to mentally affect them. Fifteen minutes' exposure to the "bio-field "was repeated. First, the mice showed agitation, convulsions, but then they became lethargic. After cessation of treatment the rodents quickly returned to normal. The mice Kulagina worked with survived for more than 10 days, while the others died half an hour after inoculation.

In the second case, mice were exposed to radiation levels of 700 roentgens. Kulagina worked with some of them. These mice lived about 10 days, while the control group did not last more than a quarter of an hour.

There were experiments studying Kulagina's therapeutic effects on people. She improved the treatment of inflammatory processes, migraines, radiculitis, wounds and cuts, as well as some internal diseases.

Ninel Kulagina died in 1990. Researchers dedicated a book to her called "The Phenomenon of "K". Versatile talents of this amazing woman still remain a mystery to scientists.