Babies for sale in Ethiopia 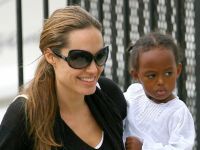 Has anyone ever asked movie star Angelina Jolie how much she paid for the Ethiopian baby she adopted? Or should I say how much she "donated," most of which ended up in the hands of the national crime syndicate known as the Government of Ethiopia.

For several years now just about anyone has been able to buy a baby in Ethiopia, you know what I mean, "adopt"? It costs about $30,000. Cash. Some reports say over 3,000 are sold...adopted, every year.

It has turned into a major cash flow for the Godfathers of the Ethiopian "government". Do the math, 3,000 X $30,000 X 5 years = almost a half a billion dollars, requiring more and more London bank accounts to be set up to be stuffed chock full of some very sick money.

When you buy...adopt, a baby in Ethiopia there is a good chance that the baby isn't an orphan, though it is usually standard language in all the deeds of sale/adoption papers that such is the case. With millions of Ethiopians once again famine stricken, selling babies has become a way to survive. Though of the $30,000 as little as $1,000 makes it through the hands of the Ethiopian mafia to the babies' families.

If one has been reading the pages of this and other websites willing to publish what is really going on in Ethiopia, you will know that Ethiopia is committing genocide by enforcing a food aid blockade against the ethnic Somalis in the Ethiopian Ogaden during the worst drought in 60 years. So why should selling babies come as a shock?

Angelina Jolie should come clean and tell the world what she really "donated" to get her little Ethiopian girl. Somehow though I wont hold my breath for it wasn't that long ago that Ms. Jolie was calling for the USA to declare war and invade Sudan. Buy an African baby from Ethiopia and then bomb some African villages in next door neighbor Sudan, it's Hollyweird isn't it?

The UN is even weirder though. With Ethiopia committing genocide in the Ogaden, the UN inSecurity Council is talking about passing even more damaging sanctions against...next door neighbor Eritrea?

The saying goes in this part of Africa "all roads to peace in the Horn of Africa run through Asmara [Eritrea]..." and there is one thing the USA and its cheerleaders in Hollywood are dead set against and that is peace breaking out in Africa.

With the UN there to enforce the Law of the Jungle, only the strong survive. And survivors, especially those that wont kneel down at the master's feet, have to be made examples of. Or at least it has to look that way, so tougher sanctions against Eritrea is the USA's demand.

So buy a baby in Ethiopia and support genocide. And don't forget to declare war and start bombing Sudan. In the meantime, get busy and start enforcing even tougher sanctions against Eritrea.

Either that, or better yet, make sure no one even hears about all of this, business as usual, you know, with none the wiser?

Thomas C. Mountain is the only independent western journalist in the Horn of Africa, living and reporting from Eritrea since 2006.