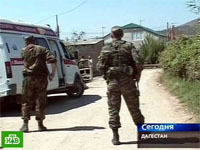 The case of the 13-year-old girl from the republic of Dagestan, who was kidnapped and gang-raped by teenagers is taking an unexpected turn. The case stirred quite a commotion in the whole republic. However, it seems that the case is about to fall apart, and the perpetrators may avoid punishment. The victim, Zalina Ayubova, suddenly changed her story, RIA Novosti reports.

Zalina was kidnapped in the city of Khasavyurt in September 2010. The kidnappers - a group of teenagers - were holding the girl captive. They were assaulting and raping her for three days.

The atrocious crime committed by 14-year-old teenagers received an extensive coverage in Dagestan. The girl was found and saved incidentally, when no one expected that to happen. The residents of the republic were extremely concerned about the fact that the prime rapist in the case remained free during investigation. This detail triggered actions of protest in Dagestan. The President of the republic, Madomedsalam Magomedov, promised to take the case under personal control.

The investigation of the case was drawing to a close when the girl suddenly changed her story, a source told RIA Novosti.

"The victim now says that everything happened at her own consent," an official said.

The case had to be sent for additional investigation.

The juvenile perpetrators kidnapped the girl as she was walking home from a polyclinic. On her way back, the girl came across her former classmate, Shamil Khasimov, and his friends, whom she did not know. Shamil offered the girl to come and join them and then take her back home. Zalina refused, but the teenager said that she would have to go with him against her will. "You are coming with us, otherwise you'll have big problems," he said. According to Zalina, Shamil was a well-known hooligan in her neighborhood.

The teenagers locked the girl in a booth near the local prison. Shamil's friend Magomed Labazanov raped the girl first. Afterwards, they took the girl to a motel on the outskirts of the city and continued raping her there one by one. A watchman heard the victim's screams, but the teenagers simply told him that the girl was naughty.

Afterwards, the teenagers took the girl to a building, the construction of which was suspended. Shamil's friends were paying him for the possibility to rape Zalina - 150 rubles for a first and 200 rubles for a second time ($5-6).

In the morning of a third day, rapist Khasim Khasimov called Zalina's mother and made her an appointment. He told the woman not to go to police. The woman and her relatives were searching for the girl all over the city and its outskirts.

After Khasim's call, the woman contacted the chairman of the local criminal investigation department. They both went to the appointed location for the meeting. The woman found her daughter unconscious lying on a piece of cardboard on the concrete floor of the abandoned building in the village of Severny. The girl was not eating or drinking anything during the three days of horror.

The criminal investigation department filed a criminal case against the perpetrators. The mother of one of them offered a compensation of 600,000 rubles to Zalina's mother ($20,000), but the woman refused. The bribe-giver started threatening the aggrieved party claiming that she would solve her son's problems in another way. Zalina's mother believes that her daughter was not the only victim of the teen gang.