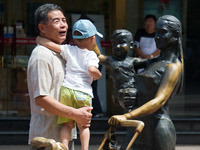 China has been struggling against overpopulation for decades. It seems that this problem exists in the country for ages. It now appears that the Chinese authorities have finally managed to succeed in changing the traditional imbalance between male and female newborns.

Nevertheless, the Chinese realize that the so-called gender imbalance in births remains on a very high level. In many regions of the country, there are only 100 women per 130 men. If the situation does not change, every fifth Chinese male will find it very difficult to find his lifetime partner by 2020. Just try to imagine tens of millions of lonely Chinese men who will be ready for anything just to get married and have a family.

This problem poses a serious threat to the social stability of the Chinese society. The situation in Russia, China's neighbor, is precisely the opposite. In 2010, the predominance of the number of women over the number of men made up 10,495 people vs. 9,956 people in 2002.

Generally speaking, female fiancées in Russia outnumber male fiancées by over ten million. This probably explains low birth rates in the country. The question of gender imbalance is most serious in the regions of the Central federal district of Russia.

Gender imbalance may lead to lower birth rates and to the decline of the population in general. Strangely enough, there are over 20 million bachelors living in Russia nowadays, and the number is expected to grow.

Igor Yanushev, Candidate of Medical Sciences, a psychologist, said that the problem of gender imbalance in China is connected with family planning regulations in the country which stipulate the birth of only one child.

"Traditionally, Chinese families want to have boys. They are ready for anything just to have a boy. To struggle with the problem of gender imbalance, the Chinese authorities restricted the use of ultrasound examinations during pregnancy and banned gender-based abortions. Chinese parents can find out the sex of their child only after the birth of a baby.

"The most simple way out of the problem for the country is migration. Russia, an underpopulated country is the best option for such an overpopulated country as China. I've read many times in the press that it is impossible to count the number of Chinese living in Russia already.  We may be  witnessing the beginning of the Chinese demographic expansion in Russia," the expert said.