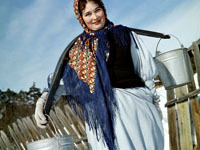 It would seem that the feminist movement has been around for so many years that it should have already fully equalized women's and men's rights. Yet this has not happened. Expert analysis has shown that even today the society refuses to consider women as leaders and they continue to suffer from gender stereotypes.

Most of us have heard this puzzle: late at night, father and son are traveling in a car on a poorly lit road. Suddenly, a deer pops under the wheels of the car. The hood is smashed, the son's head is cracked. The father catches a ride and takes his son into a hospital. The child needs an immediate surgery, but the surgeon, looking at him, recoils and says, "I cannot do this. This is my son." Question: How could this happen?

The answers are pretty predictable. "Was the driver his stepfather?" "No." "Does the boy have two dads? Are they gay?" "An interesting option, but no." And the answer is quite simple: the surgeon is the boy's mother.

Women today can hold key positions, such as Angela Merkel and Hillary Clinton, but public opinion has remained virtually unchanged for several centuries: women are obstinately denied the right to leadership.

Take as an example a democratic country like the U.S. To date, more than half of the jobs in America are taken by women. Their salary is 77 percent of the salaries of men working in the same positions. In case of the Americans of color the gap is even more substantial. It is not surprising that at all levels the labor market is full of disgruntled women.

Approximately 40 percent of students in elite business schools are female, and it is particularly difficult for them to move up the career ladder. A study by the nonprofit organization Catalyst in 60 U.S. top companies indicates that among 500 directors there is not a single woman. In another 136 companies women are not included in the top five executives, and in 26 - in the executive management team.

Meta-analysis of Northwestern University in the U.S. showed that, even today, in 2011, women are seen as anything but leaders. The first data on the subject are dating back to 1973. In regard to the position of women as leaders the opinion of respondents has remained virtually unchanged since then.

Business women suffer mainly from two social prejudices. First, they are considered less qualified, and secondly, if a woman takes "male" traits, she is viewed as an arrogant upstart.

This reaction to female leaders reflects gender stereotypes. Previous studies revealed that "management" qualities were assigned by the respondents mainly to men, while women were attributed "general" qualities. Therefore, it is not surprising that in the understanding of the majority the "boss" should be a male representative.

However, there is a tiny ray of hope for the ambitious women. Alice Eagley, professor of psychology and the study co-author, noted that women should be encouraged by the fact that the society no longer sees managers exclusively as men. This is a certain progress because it is getting easier for women to reach the heights in their careers. The reality however is that a lady who has a firm position is viewed as a bitch. No other options.

Hillary Clinton is very aware of this attitude. During the 2007-2008 election it seemed that she could not do anything right. Once, when she burst into tears, the public immediately wondered: is she even good for a leadership position? As soon as Hillary showed resilience and strength, she was called a cold angry robot.

Eagley explained that women, especially women like Hillary, are expected to become good managers. They must be assertive, competitive and strong like men, but on the other hand they should be womanly friendly, compassionate and courteous. The combination of these qualities is a balancing act.

What can be done in this situation? Nothing extraordinary - women should just continue to do their work and do it honestly. Despite the existence of double standards in regard to women in top positions, the best option would be to never use excuses "I am a woman."

Experts with the World Economic Forum believe that mainstream companies are not able to extract all benefits from the female half of staff. As a result, women's talent is wasted. At the same time a study carried out four years ago by McKinsey & Co. showed that companies employing at least one-third of female managers are more successful than those with purely male management. Women are more likely to take collective decisions and think about the consequences of their actions.

In addition, women are more sensitive about the clients' issues, are better planners, more successful in prioritizing and more focused on results. This does not mean that male managers lack these characteristics, but at the macro level it is still the prerogative of female leaders.