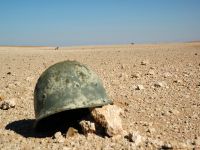 It has been several years since I covered a story on Iraq, after having dedicated my energies behind the scenes prior to 2003 towards mobilising forces to stop the attack, then witnessing the destruction of a country and the slaughter of its people and then the wholesale chaos which follows a NATO intervention.

Eight long years later, has Iraq the infrastructures which were destroyed by NATO military hardware back in 2003? No. Have the effects of Depleted Uranium munitions diminished? No. Has the Iraqi youth today a better future than back then? No. Then who gained what?

In August 2011, we continue to see the bloodbath unleashed by NATO continues. Today, no less than 63 people lost their lives in a string of attacks which ravaged through 17 cities, mirroring NATO's multiple terrorist attacks in Libya.

As NATO cavorts with Al-Qaeda in Libya, the same horrific organization is blamed for the attacks of today in Iraq. Why, the terrorist leader in Libya, al-Hasidi, was responsible for recruiting Benghazi suicide bombers to fight NATO in Iraq. And Afghanistan.

So if your boy goes down in Iraq or Afghanistan, then ask your government why NATO is siding with the self-same terrorists in Libya which are trying to destabilise the Government, which in turn does its best to reduce civilian casualties, and even casualties among the terrorist elements unleashed by NATO.

Now THAT is a story you will not find in any western newspaper, whose journalists should choke on the money they make writing lies.