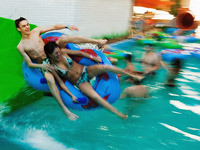 The first water park was opened in Russia in the settlement of Nebug, near the city of Tuapse in 1997. The number of water parks in Russia has increased greatly in 14 years; they have become extremely popular in the country. Indoor water parks appeared in many cities across the country, not only in Black Sea resorts. Their number continues to grow still: a new water park is to be opened in the city of Ufa by 2013.

Russia is the home to Europe's largest water park from the point of view of water displacement. The tonnage of Tiki-Tak waterworld, opened in 2008 in the city of Anapa, makes up 6,000 cubic meters. Many Russian waterworlds are better than those in Europe from the point of view of entertainment and design, tourists say. However, is it possible to say that the Russian waterworlds are just as safe?

Two tragedies have occurred in Russian water parks during the recent two weeks. Both of them took place in the Rostov region of the country. A five-year-old boy drowned in Lazurny waterpark in the city of Taganrog. The boy's body was recovered from the pool, the depth of which was 180 centimeters.

A week earlier, on July 22, a similar accident took place in the city of Novocherkassk. Another boy, also aged five, died in the pool which was 135 centimeters deep. It was revealed during investigation that the safety rules of the waterworld were not observed properly.

In 2009, a tragedy took place in Magnitogorsk. A family of the Valeyevs was visiting the local waterworld on a regular basis. The father of the family used to be a teacher of physical training at school. Like in the above-mentioned cases, the victim was also a five-year-old boy. The boy suffered serious injuries as he was going up the stairs. He slipped and fell down on the tiled floor. Luckily, the child survived the fall.

In 2007, a child died in Leto-STOP waterworld in the city of Kazan. That was probably the most horrific and the most complicated incident of all mentioned above. The boy, Sergei Matveyev, 13, disappeared without a trace. None of the visitors could see where the boy went. Some people said that they saw him in the pool of the "Slow River" attraction. Rescuers and police officers were searching for the child all over the building of the water park, although to no avail.

The details of the tragedy were unveiled three weeks later, when a pump of the water park came out of order. The technicians, who examined the technical department, opened the pipe and found the boy's remains inside. It turned out that the boy was sucked into the water collector of the "Slow River" attraction, which was not slow at all. The speed, at which the water was flowing near the hole of the water collector exceeded the norm nearly four times. The hole was not covered with protection screen. An employee of the park, who was responsible for safety rules, was sentenced to two years in a penal settlement.

As a rule, no one reads safety rules when visiting a water park. People go there to entertain themselves, and they simply ignore their own safety.