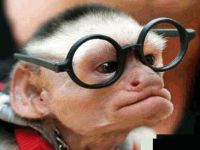 For the report, "to create features such as language or human appearance" raises ethical questions

The Academy of Medical Sciences of Britain is urging the government to lay down stricter rules for medical research involving animals. The group fears that experiments involving the transplantation of cells end up creating anomalies, like monkeys with the ability to think and talk like humans.

The warning underscores the debate on the question of the limits of scientific research. One of the authors of the report, Professor Christopher Shaw, of King's College London, says such studies "are extraordinarily important."

The academy also stresses that it is not opposed to experiments involving, for example, implanting cells and human tissue in animals.

In current studies, for example, cancer cells are transplanted into mice in order to test new drugs against the advancement of the disease.

The academy defends, however, that with the advancement of new techniques issues are emerging that urgently need to be regulated.

Current scientific advances now allow the creation of mice with lesions similar to those caused by a stroke, that are then injected into human stem cells in order to correct the damage.

Another study involved implantation of a human chromosome in the genome of mice with Down syndrome which was also essential to understanding that disease.

Although most of the experiments are being done with mice, scientists are particularly concerned with research on monkeys.

In Great Britain investigations are prohibited with great apes such as gorillas, chimpanzees and orangutans. In other countries like the United States, they are allowed.

"What we fear is that if we start to introduce a large number of human brain cells into the brains of primates and suddenly with that the apes acquire some of the skills that are considered uniquely human, such as language," says Professor Thomas Baldwin, another member of the academy. "These possibilities are explored a lot in fiction, but we need to start thinking about them," he says.

The report indicates three particularly "sensitive" areas in animal research: cognitive, that of reproduction and creation of visual characteristics that would make them see themselves as human.

Professor Martin Bobrow, lead author of the report, suggests what he calls "proof of the great ape" if a monkey that received human genetic material begins to acquire capabilities similar to a chimpanzee, it's time to stop the experiments.

In the area of ​​reproduction, it is recommended that animal embryos produced from human sperm or eggs do not develop beyond a period of 14 days.

The field that is the most controversial is that of animals with "uniquely human" characteristics, experiments that the report calls "Frankenstein types with humanized animals."

According to the report, "to create characteristics such as language or the human appearance in animals like facial shape or texture of the skin, raises very strong ethical issues."

(Ed. Note: What's so bad about talking monkeys? Might be very interesting to see what they have to say to us humans.)