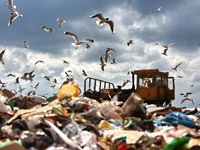 A waste sorting plant has been closed in the city of Krasnoyarsk, Siberia. The losses of the enterprise made up 60 million rubles. Waste processing companies act as direct competitors to those who de facto own the landfills in Russia.

The waste sorting plant in Krasnoyarsk was launched two years ago. In a hope for the support from the state, entrepreneurs invested in the waste-processing business as an important industry for the region. However, it turned out that it was much more profitable to simply throw the garbage out on landfills.

There were 70 million rubles invested in the project, but the losses of the only waste sorting factory in the region made up 60 million. The owners of the enterprises eventually decided to wrap up their activities, the Siberian News Agency reports.

The factory was dealing with the extraction of paper, plastic and metals from the wastes. The extracted products were subsequently sold outside the region. The capacity of the enterprise was up to 100,000 tons of wastes a year.

"They charge 32 rubles (a bit more than $1) per cubic meter of wastes at landfills. The factory is supposed to charge twice as much to accept garbage - nearly 70 rubles to reach profitability," Yevgeny Malchikov, deputy director of Stroi Plus company said.

Also read: Mankind may soon suffocate in its own garbage

It is worthy of note that the majority of Russians do not sort their daily wastes. This factor also undermines the profitability of waste-sorting enterprises. In Western countries, the participation of the population in the waste-sorting process decreases the costs of production considerably. It could be possible to attract small business to the preliminary sorting of wastes, and such cooperation is already in practice. However, waste-processing enterprises are in direct competition with those who de-facto own Russian landfills.

During the Soviet era, there was a system of the multiple usage of glass packaging. When buying bottles of milk, lemonade, etc, people could return the bottles back to special bottle-collecting stations. The stations would pay not more than 20 kopecks per bottle, which was not much at all. However, the amount was enough for three of four rides in public transport. An average family would normally collect tens of empty bottles a month, and all of those bottles would then be used in production repeatedly. The system was giving a financial incentive to people, but it hardly works now. The practice was remarkable indeed: it was environment-friendly, not to mention the fact that people could consume goods without paying extra for packaging.

In the West, there is a practice to collect 80 percent from the volume of sold packaging from producers. It goes without saying that it is much more profitable to produce, for example, beer in glass bottles than in plastic packaging.

In Russia, many goods, especially drinks, are sold in plastic bottles (PET, PETF) which do not decompose in the soil.

In the Krasnoyarsk region, a family pays about 90 rubles a month ($3) for the disposition of solid domestic wastes. There are as many as 300,000 apartments in the city, which means that the disposition of garbage brings approximately 27 million rubles of income a month to public utilities and over 320 million rubles a year, Vesti.ru wrote. To put it in a nutshell, a company that takes garbage to landfills makes a lot more money than a company that processes garbage.

Practically 100 percent of garbage in Russia is buried in the ground. The figure in the European Union is much lower - 20 percent. Nearly 40 percent of solid domestic wastes consist of waste paper, plastic, glass and metal. All of that can be recycled or used in production repeatedly.

The waste-processing industry is in embryo in Russia. In the beginning of 2010, there were four waste burning, waste-processing plants, as well as 39 waste-sorting plants in the country. However, the industry is not effective at all. Russia produces over 40 million tons of domestic wastes, whereas 35 percent of that amount could be recycled.