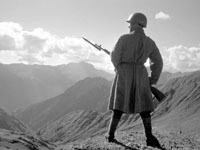 American historian Jeff Strasberg in his book provides considerable evidence that within the period from 1936 to 1941 the Soviet Union was working on top secret project to create super-soldiers. He argues that the experiment involved some 300 volunteers of young age and cites numerous eyewitness accounts.

The soldiers were not stuffed with chemicals or drugged out. They were implanted gold electrodes in their brains, eliminating the pain center. Their limb bones were replaced with titanium implants that protected the soft tissues against landmines or shells, as well as from gunshot injuries. In this case, any injury was not threatening and would not cause crushing bones and amputations.

Strasberg said that the experiment involved some 300 volunteers of young age (although participation was rather forced than voluntary). All the soldiers had to sign the non-disclosure, and the disclosure of the "military secrets" would result in death.

Half of the participants later left for the military districts, and the other half formed a special landing unit. A week before the start of World War II it was relocated to the Brest region, where on the first day of the war it was completely destroyed by the German artillery. Perhaps the Nazi intelligence reported about the "super-soldiers" in advance.

However, another 150 victims of horrific experiments on human flesh were still alive. Perhaps, there were more than 150. In 1945, American allies captured a secret medical facility in Germany. Inside there were dozens of autopsies that belonged to the Soviet troops. The bones in their bodies were replaced with steel prosthesis. There was a body of an officer with metal ribs. Several people were made dwarfs. They would become pilots, as stunted people were less vulnerable to the enemy and could take more fuel and ammunition on board the aircraft.

The work of the center for the production of the "universal soldiers" was interrupted with the outbreak of World War II. Nearly all of its employees had been mobilized into the army and died at the front. It is not ruled out that the intelligence agencies took care of it as such witnesses were dangerous if left alive.

After the war the project was shut down as non-beneficial. A nuclear bomb was created, and the idea of soldiers-terminators was deemed obsolete.

As it turns out, Strasberg's book was not the only source of information about the "super soldiers."

In 1994, Vitebsk physician Sergei Konovalenko found remains of a man at an old cemetery at the outskirts of the city. Obviously, one of the graves sapped the river water and the contents rose to the surface. He was surprised that a bony skeleton was connected with metal prosthesis on hinges. The prosthetics clearly replaced the human bones, not just arms and legs. Each of them displayed a star with hammer and sickle, and the inscription: "Kharkov. 05.39. ASCH."

Konovalenko did not touch his finding since he thought it to be sacrilege. Two days later he was passing by again, but the mysterious remnants have disappeared. They were either washed away by rain into the river, or picked up by someone.

Sergei could not forget about this story and decided to investigate. He found out that before the war there was a secret center of military prosthetics in the city of Vitebsk. At the center the limbs and joints of healthy Red Army soldiers were replaced by artificial ones.

During his "investigation" Sergei Konovalenko came across a copy of a video tape intended "for official use." The footage looked horrible: a soldier's leg is cut at the knee and the bone is pulled out, then something metallic is tucked in its place. At the same commentator says that the operation is performed without anesthesia, as the pain center was removed from the human brain. The soldier exposed to these brutal manipulations is smiling. In the second part the soldier's arm is cut off at the elbow - a fountain of blood is splashing. And again, the "volunteer" has a humble smile on his face.

According to Konovalenko, many died after such surgeries since foreign parts were rejected by the human body. The majority of the soldiers with disabled pain centers subsequently developed brain tumors or mental illnesses. The Soviet military surgeons did not manage to create an army of invincible soldiers, although still won the war.