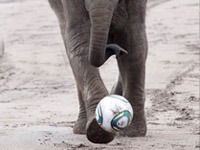 A new animal may replace legendary octopus Paul, who accurately predicted the outcomes of football matches during the World Cup in South Africa. Now the world may have another forecaster from the animal world. Her name is Nellie, and she is an elephant.

An employee of the German zoo, where Nellie lives, said that the elephant successfully predicted the outcomes of matches for the German team at the women's World Cup.

Nellie's predecessor, Paul the Octopus, from Germany's Oberhausen, became world-famous after he managed to predict the results of eight matches of the World Cup tournament in 2010. The octopus sadly died last year in October.

Prior to the current championship, eight German oceanariums announced a competition to find a successor to the late octopus. Molluscs from all across Germany are taking part in the competition. However, it appears that none of them can become an oracle.

Most likely, the new forecaster will be Nellie, the elephant. She has not made one single mistake so far. Before the quarterfinals of the women's World Cup, in which the German team was playing against Japan, Nellie was trying to score a goal in Japan's goalposts, but she could not do it even if she tried. The animal was right: Japan won the game.

The elephant will have to confirm her abilities during the final game of the championship, which is going to take place on July 17 in Frankfort am Main.

Of course, many people find such animal predictions ridiculous. However, animals have been demonstrating their ability to predict future from times immemorial. It is an open secret, for example, that animals can sense the coming of natural disasters.

At night of September 5, 1948, when the Ashgabad earthquake occurred, a family woke up as their dog started to bark loudly. The dog was trying to make its owners get up and leave their home: the animal was jumping and whirling hysterically near the door of the house. The dog was yawling, so the people let the dog out and went back to sleep. However, to their surprise, the dog started yawling and barking near the house again, wanting to go back in. The family got up again wondering what was happening. As soon as they approached the doorway, the electricity went off and everything started shaking. The quake claimed the lives of as many as 176,000 people.

It would not be correct to assume that animals can predict only natural disasters. Scientists say that animals, especially cats, can feel the coming of any misfortune that threatens their home and the people that they live with. During WWII, many people noticed that cats could predict bombardments.

There is a cat living in a nursing home on Rhode Island. The cat's name is Oscar, and he may have the sixth sense about when residents of the home are going to die. If the cat lies down on the bed of some of the patient, it means that the patient's days are numbered.

People usually perceive the gift of fortune-telling as something supernatural. It is not ruled out, though, that all living creatures used to have the sixth sense as one of their basic instincts. Humans have lost this feelings, but animals may have preserved it.