Man without face terrorizes others for decade 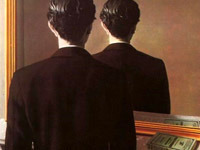 A man with no face has been terrorizing the citizens of Riga, the capital of Latvia, for more than ten years already. He is not a ghost, but a disabled individual, who had his face severely disfigured with burns. He usually creeps up on people from behind and scares them by looking at their faces. The man does it just for fun. Psychologists say that the man with no face and other individuals like him either take revenge on the society or simply try to stand out from the crowd.

In spite of the fact the "the man with no face" has been terrorizing people in the Latvian capital for as many as ten years, his story was made public just a short while ago.

A woman, named only as Gunta, was riding a bus when a stranger approached her from behind and touched her. The woman looked back and saw a man with horrifying burns on his face and neck. The man scared the woman incredibly, and she fell seriously ill.

Several days after the incident, the woman asked for medical help. Soon afterwards, she came across the man without face in municipal transport again. The woman saw him doing the same to a little boy.

It turned out later that the woman was not the first "victim" of the disabled man, who was entertaining himself by scaring the people around him. The woman realized that it was a very delicate subject, because the man was a very unhappy person. However, she believed that his appearance did not give him the right to hurt others.

Ivar Balodis, the head of the association of disabled individuals, said that he knew many other physically challenged individuals, who use their affliction malevolently. Balodis has known "the man with no face" for over a decade. However, the disabled man has never asked anyone to help him. According to Balodis, this way of public behavior is unacceptable even for those who suffer from serious deformities. Quite on the contrary, such people need psychological help from those who can help them live with their problems.

The story of a young American woman, an aurally impaired individual, is much more shocking. Bethany Storro, 28, attracted a lot of attention in 2010 by saying that she was maimed by a stranger, who splashed acid in her face. She was sitting in a cafe, when an unknown black woman ran up to her and splashed acid in her face. One may say that Bethany was lucky: the sunglasses that she was wearing saved her eyes.

However, it later became known that there were too many strange details in her story. Storro eventually confessed that she maimed herself, that no one attacked her. She said that she wanted to commit suicide, but then changed her mind. Storro has never explained why she made up the story with the acid assailant.

Katie Piper, a British woman, fell victim to a real acid attack. She was attacked by her boyfriend. The young man decided to disfigure the woman's face after she had broken up with him. Piper's story received an extensive coverage in the media. Katie received plastic surgery and became a local celebrity. She regularly appears in photo shoots for glossy magazines and says that she feels beautiful again.

Yuri Levchenko, a candidate of psychological sciences, believes that such people as Katie and the faceless man from Latvia have passed beyond a certain moment of desperation. They came to realize that they will never become better. They decided to live the way they are and they do not want to hide from others.

"People want to be distinctive. Some want to do with by having large breasts, others achieve something in life, some others try to stand out with the help of their deformities. Another motive of this behavior is revenge. The society has made me like this so I am going to get even with this society. This is what such people normally think. As for the people who like to watch the photos of injured or disfigured people they usually do it to realize that they are so much better," the psychologist said.