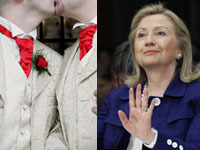 US Secretary of State Hillary Clinton has recently confirmed that Lady Gaga's recent appearance at the gay pride parade in Rome on June 11 was organized by the US State Department. During her speech in Rome, the singer cracked down on Russia for the country's discrimination of the right of sexual minorities.

The notorious singer particularly stated that Russia, among other countries, was restricting information about the problems of sexual minorities.

Officials of the US State Department have previously expressed concerns in connection with the recent dispersal of the gay march in Moscow. Germany's Foreign Minister Guido Westerwelle released similar statements on the matter. The general public of the West also took the side of the Russian LGBT community. A quick look at the headlines of European and American newspapers can easily prove this. "Persecution of gays in Russia: From jail to Facebook" (La Repubblica, Italy); Russia's best-known gay activist has an uphill fight" (The New York Times, USA); "Gay demonstration brutally suppressed in Moscow" (BFM TV, France); "Homophobia: The Council of Europe must punish Russia" (Le Monde, France); "Moscow gays fight for cause" (RFI Russian service, France); "Russian court throws out lesbian couple marriage request" (Reuters, UK); "In praise of...Slavic pride" (The Guardian, UK); "Gay pride takes a fall amid fears and threats" (The Times, UK).

It appears that Western media demonstrate absolute unity with authorities in their criticism against Russia. What is the reason for it?

"I do not feel any support from the US State Department. And I don't think that the department gives any support - they just declare things and that's all. Yes, the situation improved a lot at this point during the 1990s. In 1993, they canceled an article of the Penal Code, which stipulated imprisonment for a person for his or her sexual orientation. The psychological persecution of gays was canceled in Russia in 1998. But that was basically it.

"Social discrimination hasn't been rooted out in the society. The society still does not accept homosexuals and remains hostile to them. Gays get bullied and killed, and no criminal case has been filed in this connection yet.

"As for me, I am not a member of the movement anymore, but I am aware of everything that is happening. It also goes about violations of the Constitution of the Russian Federation, which stipulates the freedom of speech, expression and thought for everyone. There have been several attempts taken to organize gay parades in Moscow, but none of them has ever happened. The police did not guarantee security for not a very large congregation of people. This is what differs Russia from Europe. There are many homophobic people in Europe too, but the police guarantee security for such events as gay parades there.

"Russia is unable to guarantee security for as many as 200 people. At the same time, Russia is going to host such major international events as the Olympic Games and the World Cup. It gives me a reason to question Russia's ability to handle that."

Maksim Shevchenko, a member of the Public Chamber of Russia:

"I would like to say the following about this situation. Lady Gaga is a freak, whose music I can't listen to and whom I can't watch on TV. However, the USA openly supports homosexuality in Russia, which is not incidental. This is a form of intervention of a neoliberal society. The goal of that is to undermine the traditional basis of the Russian society, its gender nature. They want to turn humans into the creatures fixated on sexual and psychic drama.

"Obtruding homosexuality on Russia is an element of Satanic pagan perversion, so one must show strong resistance to this intervention. They say that we are suppressing some sort of minorities. Is it really so? Human sexuality is an intimate and private issue. No one is persecuting anyone for their personal preferences. However, if it becomes a political matter, it is no longer a personal matter of certain individuals."

Yegor Kholmogorov, a scientist of politics:

"Lady Gaga is well-known for her propaganda of the interests of certain sexual minorities and political groups. Her notorious behavior completely replaces her work as an artist. This is exactly what made her "number one" in international show business nowadays. She is being used for propaganda of homosexuality, which demonstrates the extreme degeneration of the Western civilization.

"Now they are putting this kind of pressure on Russia. We must not make any concessions to Russia at this point. We have many other more important problems to deal with, and we can't add another one to this long list.

"What do we see? Someone wants homosexuals to have special rights - this is what their requirements look like. Homosexuals want to have a right to register their marriages. The notion of marriage is much more important than the notion of sex. The most important thing about marriage is the intention of a man and a woman to officially register their relationship. The point of this is procreation, but this is not the type of situation that same-sex couples may have."

"The propaganda of homosexuality is a form of aggression against fundamental social and biological grounds of the society. This propaganda questions its gender security and the future reproduction of the civilized matrix. If this form of propaganda becomes successful, the situation with this issue will evolve into trash in two or three generations. Such a society is simply doomed.

"For Islam, this phenomenon is like a red rag for a bull, just like other forms of aggression against traditional family - feminism, matriarchate, etc. In Europe things have been developing progressively in this direction, and what do we see? European men are no longer able to act as warriors and defenders. This propaganda of permissiveness substitutes life values. Scientists say that the level of testosterone in German men has dropped four times in 1990 vs. 1943.

"We can see a company of German military men running away from a group of Talibs in Afghanistan. You may think that the United States can fall victim to this propaganda as well. However, they control the situation there very well. Centers of homosexuality are primarily located on the West Coast - form San Francisco to Los Angeles. In other regions of the USA, in the Midwest, for example, they can chop your balls off if they find out something about your sexual orientation. There are as many as 30 million people in America who do not accept feminism, homosexuality and other phenomena that lead to the destruction of the American society. The States control the situation well, but the country uses homosexuality to undermine traditional societies in other countries."